This week's Sunday Stamps comes to you from Estonia. Both of these stamps were designed by Mari Kaarma. 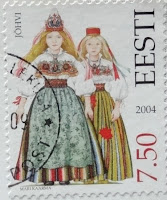 from the farthest northeastern region of Viru, this stamp from 2004 shows a Jõhvi woman and girl in early 19th century dress.
The most conspicuous common feature for women was a linen blouse called käised (meaning: sleeves) which was decorated with rich embroidery. Complemented with a vertically striped skirt, it constituted the typical north Estonian women’s dress in the 19th century. Viru wives traditionally wore caps, while girls adorned their heads with chaplets. A married woman had to wear an apron and in the 19th century it was often made of fabric bought from a shop. The Jõhvi apron was an especially festive and bright green colour. The girdle was wrapped several times round the waist, with brooches, beads and coin necklaces worn for decoration, as much as one could afford them. 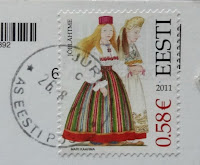 this stamp from 2011 shows a girl and a woman from the first half or the middle of the 19th century in dress from Jõelähtme, near Tallinn. The girl’s headgear is a so-called eared wreath and a wide red band decorates her green-striped skirt. The girl’s sleeve embroidery is rather simple, but the sleeves of the married woman who sports an embroidered apron are decorated with lavish wide embroidery and she wears a pot hat lined with silk.