This week we are travelling by ship at Sunday Stamps. So, when I went to my first stamp show I made a special effort to seek out ship themed stamps. I found quite a few, but the others were in Russian or Polish and I had trouble finding any information on them. And anyway, I actually have the set for these two and I tried to keep the descriptions to a minimum because I know, you probably just want to look at the stamps and move on...

and, I now know this stamp club meets for a show and sale every month, but with someone new in charge, this was the first time they actually advertised it. there was still a small gathering, but at least eight of us were there because it was announced in the "what's on" section of the newspaper. I think the collectors were pleased to see new faces.


By focusing on the ships alone, Tom Bjarnason's colour wash and line drawing has captured the essential grace and elegance of this hard-working vessel and present a visually interesting interplay of sail patterns and rigging detail. The people on the vessel give it a sense of proportion and aliveness.


These 8 cent stamps were issued in September 1975 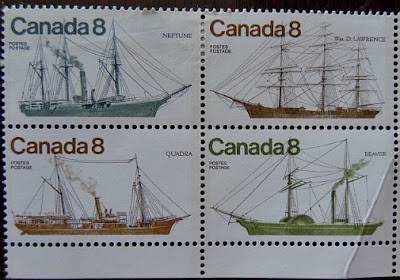 Named after her builder, designer and owner, the William D. Lawrence was the largest wooden ship constructed in Nova Scotia during the age of sail and the largest Canadian built square rigger. She sank at Dakar while being used as a coal barge.

The Beaver, the first steamship in the North Pacific, proved useful in the fur trade. Those who operated the Beaver used her not only to trade furs but to carry passengers and freight, to transport cattle, to tow log booms and barges and to conduct surveys. Still hard at work, she ran aground in 1888 near Vancouver, was abandoned and eventually broke up four years later.

The Neptune engaged in the Newfoundland sealing industry. During her career she brought in over a million pelts. In 1884, the Canadian government chartered the Neptune for surveys in Hudson Bay. She sank in stormy weather in 1943 near St. John's.

The Quadra was built in Scotland in 1891 to Canadian government specifications. She was named after Juan Francisco de la Bodega y Quadra, a Spanish explorer. At the time, she was the only government vessel on the coast available for non-military purposes. In 1917, the vessel collided with another ship and was beached to prevent her from sinking. Refloated, she became an ore carrier. However, in 1924, the Americans seized her for rum-running and later auctioned her off for scrap.

These 12 cent stamps were issued in November 1977 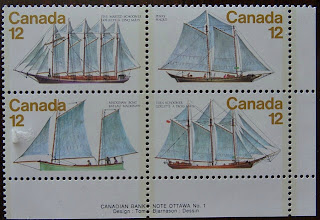 Emerging around 1815 as a fishing schooner, the pinky quickly achieved popularity because of its superior carrying capacity, comfort and seaworthiness.  The craft was particularly adept at mackerel fishing, since it could pursue schools of these creatures as they swam windward. Eventually, fore runners of the Bluenose replaced the pinky.

Vancouver and Victoria shipyards responded to the World War I shipping crisis with five-masted, 1,500-ton schooners. Most famous of the class was the celebrated Malahat, "queen of the Canadian rum runners". She increased exports by smuggling at least 120,000 cases of rum southward per year even when business was slow. After prohibition ended, the Malahat hauled lumber until she was beached in 1944, the victim of a North Pacific gale.

The Mackinaw became popular in the remote fishing camps of Lakes Huron, Michigan and Superior and even Lake Winnipeg, Hudson Bay and the Fraser River. One captain stated that "properly handled, there is no type of boat made in the same class..." to rival the seaworthiness of the Mackinaw. Perhaps this is why some people used it as a nineteenth century version of the family car.