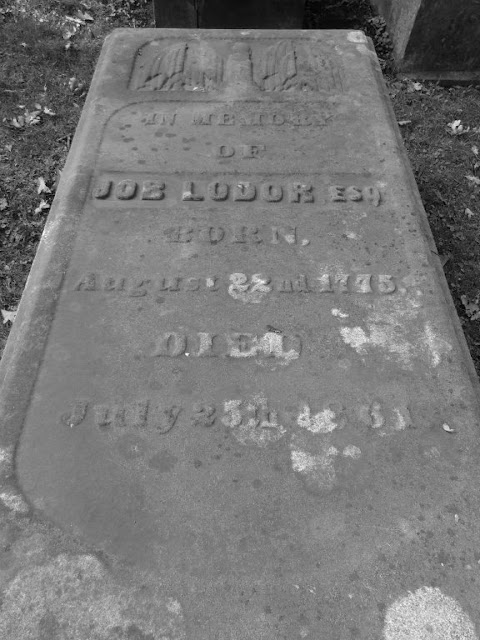 Job Loder (or as he spelled his name Lodor) came to Upper Canada after suffering some setbacks in his native "Jersies" (New Jersey) and finding himself hopelessly in debt. It is said that he left his State, not to escape his debtors, but to find a way to repay them. And by 1897 he did just that, even though by then his debts had been forgiven by "the law of time". Since he was born in mid 1775, he must have been a very young man when his business (whatever it was) failed. He returned to NJ to fulfill his moral obligation of his financial debt and then bought himself a grand carriage to return to Upper Canada and settled in Long Point on the shores of Lake Erie. He was a millwright and builder and had much greater success with the several mills he built or bought and expanded in the area, including the Union Grist Mill in Ancaster which is 75 miles NE of Long Point. Job is buried in the St John's Anglican Cemetery

Job's family life gets a little confusing. It is possible he was married twice, or maybe three times, each time to a sister of his previous wife. First recorded marriage was with Annie Lawrence from whom a son, William, was born. There is also mention of a marriage to a Anna Lawrence from whom a daughter, Mariah, was born. It seems Anna was also married previously to a John Loder.  Another marriage is recorded with Phebe Lawrence (Annie's and Anna's younger sister) and it looks like Phebe and Anna were both married to John before marrying Job Loder. Take from that what you will. Of course, ancestry.com could be wrong.
My head hurts from trying to figure this out. If you are interested, you can read a colourful account of Job Loder here. And you can read about other Taphophile Tragics stories here.
Posted by VioletSky