I had a hard time choosing which stamps to share this week. Then I thought, in honour of finally getting a tree to display my many collected ornaments, I would show these ornament stamps from 2010, designed by Michael Zavacky. It is hard to tell, but the international rated stamp shows pink ornaments, while the domestic stamp shows red (and I took dozens of photos in various light trying to get the right hue)  Missing is the US rated stamp which shows blue ornaments.
Glass blown ornaments were first made in Lauscha, Germany in 1847 and introduced to the US by FW Woolworth in the 1880s. 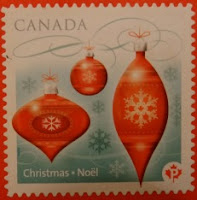 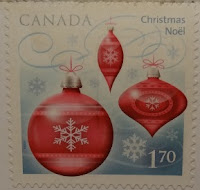 According to the Canada Post website, this 1981 issued stamp, designed by artist Anita Kunst, is the first in a series of Christmas Tree stamps honouring the 300th anniversary of the 'illuminated tree'. The other two stamps show a decorated tree typical of 1881 and 1981, neither of which I have. 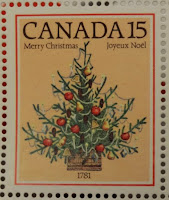 In 1781 at Sorel, Quebec, Friederike von Riedesel and her husband Friedrich introduced the illuminated Christmas tree to Canada. The illuminated tree "brought by German people to Canada, symbolizes mankind's eternal hope for peace..." In 1776 he landed in Canada in charge of a sizeable contingent of German troops sent to help put down the American Revolution. Although the Baroness had two small children and was expecting another, she decided to follow her husband to Canada, arriving in 1777. She came to be known affectionately as "Lady Fritz" in North America. After a rough few years the family were settled in Quebec. To celebrate Christmas, Friederike Riedesel had the idea of putting up an illuminated Christmas tree, a spectacle which astounded her guests.
see more Christmas themed stamps from around the world here
Posted by VioletSky