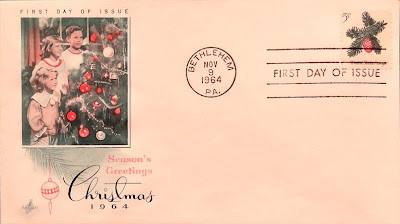 A couple of First Day Covers (actually my only Christmas FDCs)
The postmarks from Bethlehem, Pennsylvannia and Christmas Valley, Oregon are a nice touch

this is one of four issued in 1964 - the conifer. the others were of a mistletoe, holly, and poinsettia 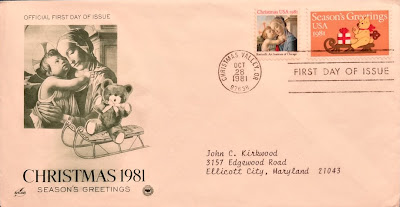 in 1981 there was both a religious and a secular stamp

the Madonna & Child is a Botticelli which you can find in the Art Institute of Chicago. the other stamp is of a felt bear in a sleigh. these stamps are non-denominational because the post office hadn't decided on the pending rate change in time. they ultimately became the first stamps issued with the new 20c first class rate.


and I included this one because I think the stamp is cute, but also because it was mailed in Wales so has Welsh written on the postmark and the air mail sticker 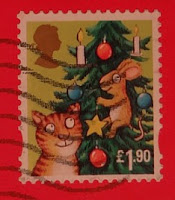 and also because of the message dear not only to family and loved ones, but also to any card and stamp collector

Merry Christmas everyone!
see more Christmas stamps from around the world here