three queens and a king

Today is Queen Victoria's birthday - her 196th,
though she has been dead for 114 of those years.
We don't do much in the way of celebrating Victoria's birthday, though it is a holiday and there are fireworks. The Victoria Day Weekend is considered the unofficial start of summer and people head out to open up their cottages, and the tourist attractions that are seasonal will now be open. And, it is now considered safe to get your garden planted. It is always said that you should not plant anything until the 24th of May because there is still a risk of frost. Very few actually believe that adage, but it was proven right this year as we (in southern Ontario) had three or four nights of frost warnings in the last ten days.

Anyway, my only Victoria stamp is on my other blog, but I do have stamps of Dutch royalty who also have their birthday as a national holiday.
Koningsdag (King's Day) is celebrated in the Netherlands on the 27th of April for Willem-Alexander.  From 1890 to 2013, of course, the holiday was known as Koninginnedag (Queen's Day) for the three previous reigning monarchs, Wilhelmina, Juliana, and Beatrix. 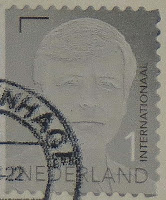 Willem-Alexander was born in 1967 and was the first male royal born since 1851. He is currently the second youngest monarch in Europe. This stamp was issued in November 2013 and designed by Job Smeets and Nijnke Tynagel. According to PostNL, the portrait was meant to appeal to a large group as well as being personal, so he is facing his public. 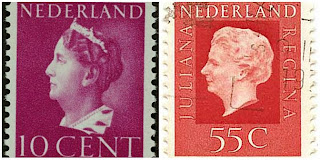 Wilhelmina (left) reigned for 58 years, longer than any other Dutch monarch. Her reign as queen (1890-1948) covered both world wars and the collapse of the Dutch colonial empire.  She was born 31 Aug, 1880 and died in 1962. She was only 10 years old when her father died and her mother, Princess Emma acted as regent.
In 1895, Queen Wilhelmina visited Queen Victoria who wrote of her in her diary: The young Queen ... still has her hair hanging loose. She is slender and graceful, and makes an impression as a very intelligent and very cute girl. She speaks good English and knows how to behave with charming manners.
Her only child, Juliana (above right) became Queen upon Wilhelmina's abdication due to ill health. She was born on 30 April 1909 and Queen's Day was moved from the last day of August to the last day of April. When she died in 1994, she was the longest lived former ruling monarch in the world.

Beatrix ascended to the throne in 1980 upon Juliana's abdication on her birthday. Her own birthday is 31 January and she decided to keep Queen's Day as 30 April, a much better time for a holiday.  She also abdicated on Queen's Day and The Netherlands had their first King since the unpopular William III.

This stamp is possibly my least favourite of any royal stamp though I appreciate the design idea. Issued in 1982, it is a Peter Struycken design featuring a field of 16,384 dots that are individually placed instead of in a usual grid pattern.