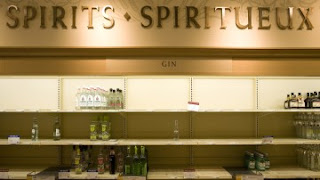 Yup, apparently there was panic in the streets of [Toronto] Ontario as the threat of 608 liquor stores being closed as a strike deadline at midnight loomed. People were stocking up on hundreds of dollars worth of all important and vital supplies as coolers, vodka (the most popular items it seems, with some stores sold out completely) and wine. The LCBO saw unprecedented sales and barely had time to restock shelves due to staff being too busy working the cash registers. Ringing in the best one day sales ever - over $60 million! (updated figures)

In Ontario the sale of alcohol is mostly available in government controlled outlets - LCBO (Liquor Control Board of Ontario) stores sell wines and spirits and some beer, and The Beer Store (formerly known as Brewer's Retail before it was dumbed down for the beer drinking tourists) which is controlled by a conglomerate of breweries, is allowed to only sell beer. You cannot buy alcohol in corner stores or grocery stores as in many other places, although some grocery stores have boutique wine outlets with limited offerings. Then again, there is always the option of going to the wineries or breweries themselves to get an even wider supply of local bottles not available in the LCBO.

In the end, the long line ups in the 3 day old "heatwave" was for nought. The strike deadline was extended. All stores will be open as usual, but with little product to sell and staff likely standing around staring out the windows, wondering where the now slightly less terrified public is storing their panic-bought goods.

headline from The Toronto Star - photo from The Globe & Mail

Labels: ripped from the headlines, the world gone mad