Where I live there is a creek running in the back and a lake across the road. So it is not unusual to see the odd duck or two (mallards) or several Canada Geese roaming around. 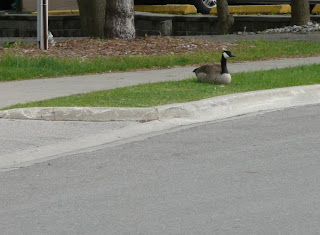 Chris has lived here for several years. I have no idea whether Chris is a male goose or a female goose - how does one tell? Canada Geese mate for life and there used to be two of them we would see often down by the creek. Then a few years ago, the other goose appeared to be limping badly. A few of us would keep our eye out for it and someone did call an animal rescue service, but eventually Chris's mate disappeared forever. But for at least 5 or 6 years Chris still comes round. All alone. 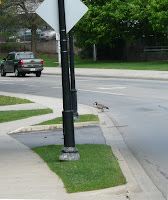 Oh, occasionally there is a squabble between three geese, but this is obviously Chris's turf and they are sent away whenever he is around.

Have you ever wondered where geese and ducks sleep? 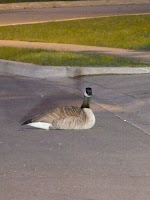 Chris seems to prefer the pavement.
And once settled, he.will.not.move. 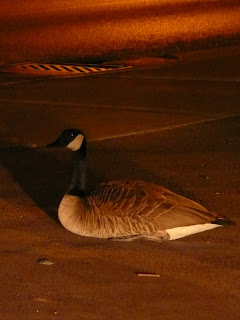 One day, I found him in my parking spot. Luckily, it was during the day and there were few other cars around so it wasn't too hard to get around him and back into my space. 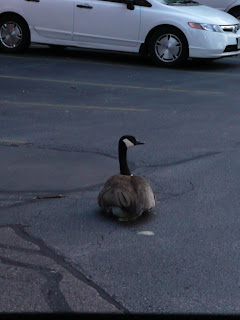 Many's the night I have found him, sleeping in the middle of the road or at the end of a driveway. It's a bit nervewracking, worrying about running into him. 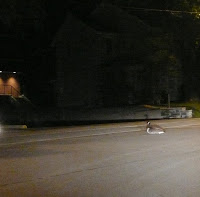 I've often wondered why he likes this dangerous corner.
Perhaps he remembers where he last saw his beloved.
Maybe he feels closer to her and has fond memories of their time, grazing and paddling the creek together.
After seeing him almost every night for most of the last month or so, I haven't seen him (or her?) for three nights.
I'm getting worried.
Posted by VioletSky