I will admit to not being a fan of either real or sculptural arachnids.

And I am not sure I can say I enjoy the work of Louise Bourgeois whose pieces tend to be rather disturbing and intense. But I certainly admire the artist who has endured and was still creating well into her 90s when she died of a heart attack (at age 98). She wasn't recognized much for her work until she was in her 60s, but graciously stated that "being ignored in the 1950s and 1960s was a bit of a blessing in disguise as it allowed [her] to work undisturbed". 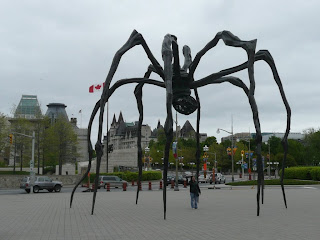 She sees the spider image as a protector - well, okay, they do eat mosquitos which we all agree we want to be rid of - and as a mother figure (see the eggs?) She created these huge creatures as an homage to her own mother who created tapestries and, like a spider, was a weaver.

It is a shame that, so often is the case, we do not know much about artists until obituaries and retrospectives of their work appear when they die. I would never have heard of her except I hated (and yet was fascinated by) that damn spider outside the National Gallery and looked up the artist. Yet, as much as I cannot feel any love for this massive metal sculpture that you are forced to endure as you enter the gallery, I admire its structure. I admire its immense size. I admire the symbolism Ms Bourgeois draws out of the spider - as the protector, the creator of webs, just like drawing (just like Charlotte, the only good spider I can think of).

And that, until her heart attack last week, she was still working on her creations. This site includes a very good collection of her art.
Posted by VioletSky