For a few harrowing days, it looked like the whole thing would be cancelled. Because the lake was still frozen. And indeed, by the time I left Stratford this afternoon, it was snowing. Again.

But, the swans were getting a bit antsy. They knew Spring was here and they were wanting to get out of their winter home and into the river to be free and frisky. 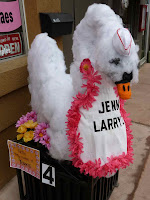 There are about 26 swans in Stratford, their numbers kept low so that they can be better managed. Swans are very territorial and the Avon River is not that big. In the winter, they are kept in a pen with a pond and fenced in outdoor area and a shed to stay warm. They also have a Twitter account for amusement.

But when it is time for them to be released into the water (or as we call it, "going outside" via Twitter), well, they are done so with a LOT of pomp and ceremony. 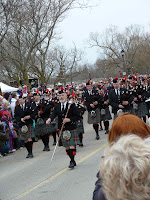 They are piped down to the river by the Stratford Police Pipe and Drum Corps. 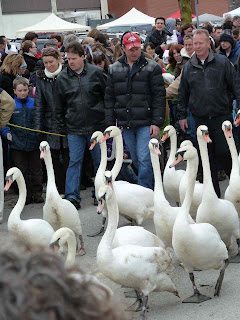 Hundreds of people descend to the short (very short) parade route to witness the event. The walk is about 5 minutes around the corner and down the path to the launching point. 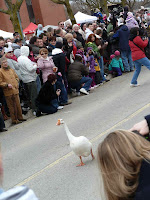 This guy was a little eager and perhaps thought they were in a race....

Then there is Nick who, as the local paper put it, "breached security" a couple of weeks ago, followed by his new paramour, Lacey. It is all the more poignant as Nick's partner, Angela, was brutally murdered by a drunk last year. She was basically defenceless as she was nesting and would not leave her eggs. (The attacker was found and charged) Nick mourned for months and spurned all offers of friendship. Until now. 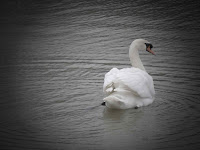 Nick came by the launching area before the swans were paraded down, perhaps to greet his old buddies. Or to gloat....