it was hotter than texas*

This might be our new catch-phrase, to replace the more cumbersome "it is hotter than the last time it was this hot at Thanksgiving" (which was about 3 years ago). It was also more humid than any October weekend should be. A friend of mine described how she spent all day Saturday scooping the leaves out of the pool instead of draining it. She did this while in the pool. As we sat outside, watching the thermometer and waiting for that magic number that would break the records (it got up to 28C) and as we ate our turkey and stuffing and roasted vegetables, I thought, this must be almost what it is like at Christmas in Australia and New Zealand. If you squinted against the bright sunlight you could almost imagine that the bright yellow leaves of the maples were instead, big blossoms. 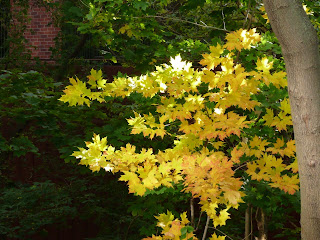 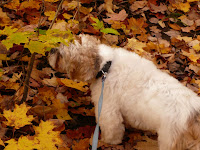 All in all, it was a perfect weekend for walking through the forest or
driving around the countryside looking for fall colours and taking in the studio tour seeking out interesting artisans. Or getting lost finding the poorly signed studios. Not lost, really, I was familiar with the area having lived there for a time, but the signs on these long country concession roads were a little confusing and I ended up a little disoriented. And looking at the brochure, I discovered that GPS co-ordinates were provided in place of addresses! At one point, I just gave up and had some ice cream.

Later, while the turkey was merrily roasting and before the rest of the clan arrived, I decided to go sailing. Last year Orillia had the guitars, this year the street art was sails. Sixty of them. They had been up all summer, but this was my first opportunity to get a chance to find them all, or most of them. 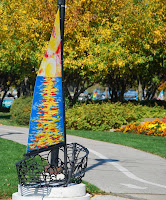 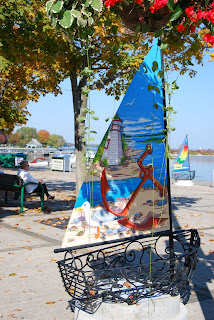 some of them had different designs on the other side 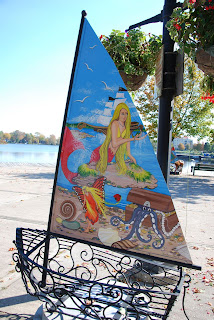 sail on over to my other blog here for more pics

* the news kept making a big deal out of the fact that some cities here were hotter than Dallas, like that was a benchmark of some sort.
Posted by VioletSky

Labels: a lovely day to be outside, art, driving around the countryside when I should be working, this is for geewits, weather is drama