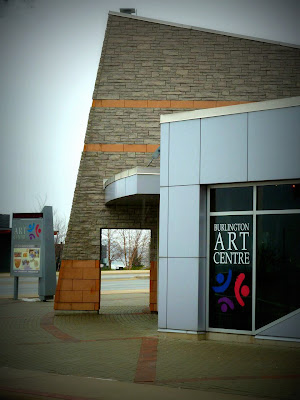 Some of you may have noticed that I haven't been doing a whole lot of writing on this blog lately. I need to get out and have more activities (other than collecting postcards and stamps and, now, visiting cemeteries) I did try going out to a different cafe at least once a week with the intention of writing about that experience... but sometimes, nothing interesting happened as I sat and drank my black coffee and read my book (currently Patrick deWitt's Sisters Brothers and Adam Gopnik's Everything but the Table). So I have decided to give myself a theme for the weekly ABC Wednesday challenge and incorporate it into both my photoblog that has better pictures and less words and this one, that is usually more words with a few pictures.

Last week I showed (on Sightlines, go have a look) my favourite art deco house. This week we are on to letter B, which could be for Burlington. I will wander around town taking pictures and telling a story as we progress through the alphabet of things that are specific to where I live.

So, we have BAC and BPAC. First, the Burlington Art Centre. It has been around since 1978 (which is 20 years before I moved here) and has several classes, guilds, exhibits and a wonderful gift shop. There is also a coffee shop, a greenhouse and courtyard. Just to give you an idea, I photographed the fire exit map. 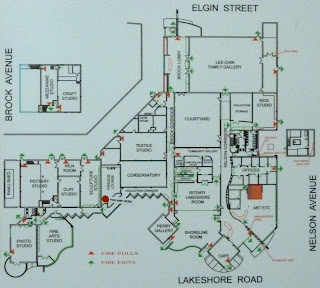 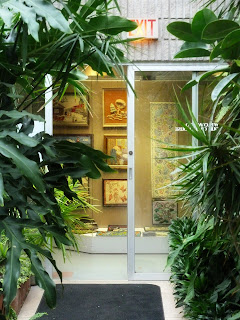 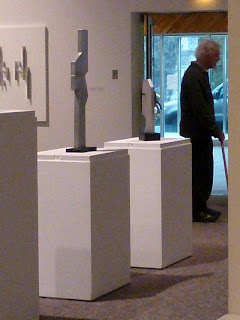 It is a maze of rooms and displays and, sometimes, if you are lucky, you might run into the artist who has show. Gino Lorcini has a stunning exhibit of metal sculptures. I overheard him say that this would be the last exhibit of his work (he is almost 90 afterall!)
A short walk of two blocks or so and we have the brand new Burlington Performing Arts Centre. It has only been open since last fall. I have already tried to get to see two performances but they sold out quickly. One of the nice things about BPAC is that it is a small, intimate theatre with unobstructed views and good sound no matter where you sit. (at the open house I moved around to several seats from orchestra to balcony to the side box seats - all perfect). Every seat in each performance is the same price. 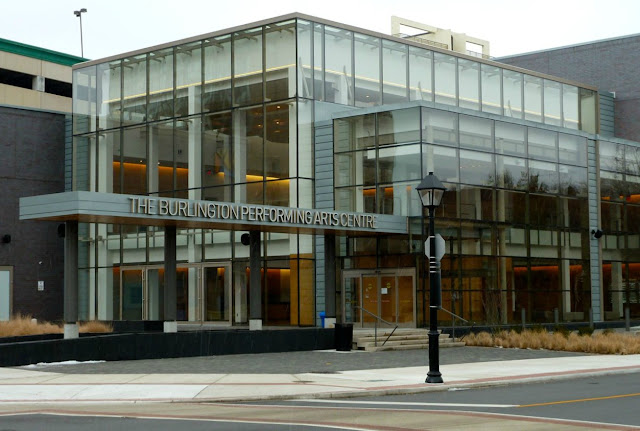 and on Saturday I get to see one!
continued on Sightlines
for ABC Wednesday
Posted by VioletSky