it is time for some Sunday funnies over at Viridian's

the first Finnish comic book was created in 1911 and in November 2011 a sheet  of stamps celebrating the first six decades was designed by Ville Tietäväinen.
For the 1950s, the stamp features Kili ja Possu, written by Olavi Vikainen (1915-2005), who specialized in animal characters in children's comics that were published in a number of Finnish and Swedish papers. 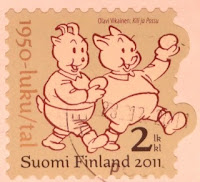 I am not sure why the google translations insist on referring to the comics of  Bunny, Kili and Poss (pig) as "psychopathic" and until now, they were new to me

this character, I am a little more familiar with
one of a set of six stamps for Nijntje "veilig en wel" which translates in English to Miffy, safe and well.
Nijntje is a rabbit (the name is a diminutive of the Dutch for little rabbit: konijntje)

she was created by Dick Bruna in 1955 as a story he told his young son about a rabbit they had seen while on holiday. there are now over 30 picture books featuring the minimalist drawn Miffy for 4-8 year olds 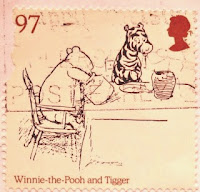 and who does not love Winnie-the-Pooh?

this one of the set, designed for the Europa 2010 theme of children's books, features Pooh and Tigger enjoying their honey and is rated for international airmail

I think we can all agree that E H Shepherd's drawings are far superior to the insidious Disney version.......
Posted by VioletSky