We have our choice for Sunday Stamps, so this week I would like to remember renowned Inuk artist Kenojuak who passed away January 8, 2013 at her home in Cape Dorset, Nunavut (formerly part of The Northwest Territories). She was born in 1927 and led a nomadic life around Baffin island before settling in Cape Dorset. Kenojuak Ashevak was the last surviving member of the Cape Dorset arts co-operative
You can see more of her works at the Spirit Wrestler Gallery website 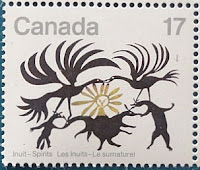 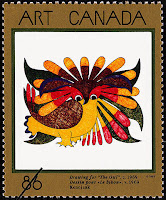 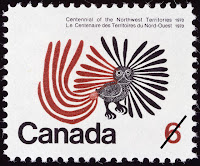 (my copy of the Enchanted Owl has a messy cancellation mark on it, so both of these are from the Postal Archives website)

Although the Inuit are an ancient civilization, little was known of their artistic pursuits until James Houston arrived in 1948 as the civil administrator for West Baffin. He introduced print-making to the local artists and Kenojuak soon distinguished herself in the field. Born in 1927 at the Baffin Island camp of Ikerrasak, she was originally reluctant to undertake drawing, since this was the domain of men. However, she took the paper offered by Mrs. Houston, beginning her fascination with the graphic arts. She works mainly in graphite, coloured pencils and felt-tip pens, rarely using poster paints, watercolours or acrylics. Many of her prints are not "pure Kenojuak", since the addition of colour shading and texturing is done by lithographers. This year's masterpiece displays the original work - a "true Kenojuak", which reveals much about her original techniques. Not attempting realism, she embellishes her work to the point of abstraction. She insists that the owl has no special significance, but everytime she faces a piece of paper, an owl always seems to emerge. (archives website, 1993)
Posted by VioletSky