With Queen Beatrix's news last week of her passing on the reign to her son Prince Willem-Alexander, I thought for Postcard Friendship Friday, I would show some postcards I've received from the Netherlands. 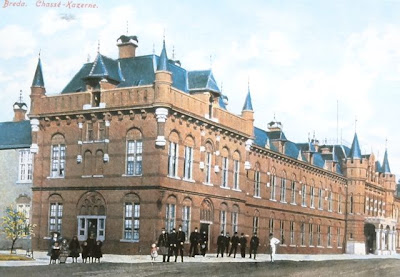 First up is a reproduction of a 1910 card showing Chassékazerne, a former military barracks that is now the Breda Museum. It was built in 1898 but by 1993 the artillery was reduced and moved to t'Harte. Before being completely gutted in 1998 order to update it for use as the Breda Museum and City Archives it housed about 1,000 asylum seekers from the former Yugoslavia. Breda is in the province of South Brabant.

This is a home made card showing a caricature of Landgraaf, which is in also in the south, in the province of Limburg.  On the left you see a giant man that is in 'Mondo Verde' [Green World, a family theme park]. Above that is the church, then you see the city hall. Further you see the big indoor Ski Run, music and in the background, the German border. Typical houses from our city and a poster from a big music festival called 'PinkPop' 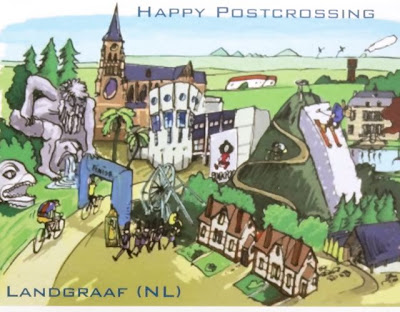 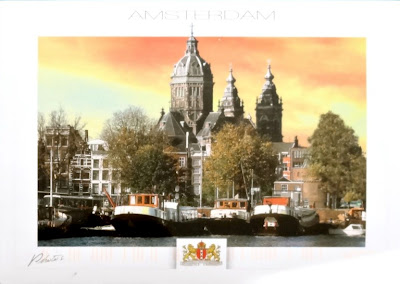 I love the sunset against                   St Nicholas Church
In the province of North Holland is the city of Hilversum, known as Media City since it is the centre for the radio and televisions stations. 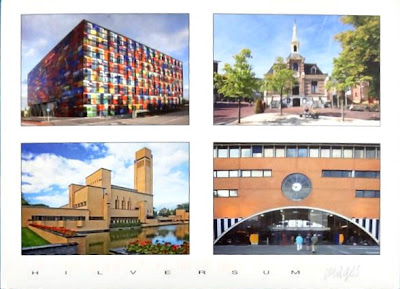 The colourful building in the top left is a radio and television museum [Institute for Sound and Vision] The glass windows show important moments in Dutch television history. Underneath is the new City Hall  built in 1936 followed by the old City Hall. And at the bottom right, the train station.

and, finally, cheese and tulips. 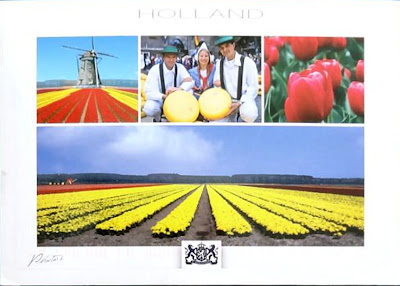