how to spend time with people

There were a couple of messages on facebook inviting me to play some silly game. Normally, I ignore those requests, but in a moment of boredom, I checked it out. I already play scrabble with a couple of people (though I keep forgetting for days/weeks at a time).

I have been busy trying to beat my cousins' scores on Diamond Blitz. I managed to wriggle my way into second place! Now, I sit at the computer impatiently waiting for 'new life' so I can continue. This is why I never played things like tetris before. Sigh. The laundry is waiting for some new life as well.

In other news, I am now the 50th on most postcards sent from Canada. I suddenly felt a competitive urge come over me when I reached 49th on longest distance in Canada. I am ridiculously excited by this achievement.

And a friend and I went to out to dinner last night for Winterlicious. We chose a restaurant that is well known for being a mecca (for people known as stars) during the Toronto International Film Festival. Just to get ourselves inside and see what they would see.
This was desert. 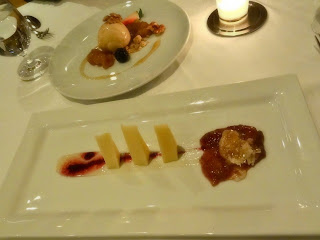 apple crumble
and a cheese plate