I get so excited whenever I see a "Hooray! Your postcard has been received" in my inbox. First, I have to read the message from the recipient then, before I know what I'm doing, I'm logged on and requesting an address to send another card. Sometimes, I regret being so impulsive. Especially if it's a Friday when I know the mail won't go out until 5pm on Monday. That adds 3 or 4 days to the travel time.


This morning I had a message from a Postcrosser exclaiming shock that her card had reached me in 3 days. She was from Germany. She was sorry, she hadn't even gotten around to uploading the photo of the card. It's true, a card travelling between Canada and Belarus or Ukraine, can easily take anywhere from 25 to 59 days to be received. But after checking the stats on my account, I can confirm that it is not unusual for a card from Germany to arrive in 5 days or less. Talk about efficiency!


I have been rather lax in uploading my received cards and I now have several dozen that need to be shown. So this afternoon, I got out my little tabletop tripod and set it up to take pictures of them all and am at the moment taking a break from posting them on the Postcrossing site. When done, I'll finally be able to sort and file them into their appropriate boxes.

I'm also staying inside to watch the Doctor Who marathon that has become a Sunday afternoon tradition. (I know, I've already seen each one at least twice - okay, three times - but there's always something you may have missed)  Tonight we have Doctor Who: Doctors Revisited 'The Fifth Doctor'.  This is actually the first doctor I remember watching (Peter Davison, if anyone needs reminding). I have been struggling with some of these old episodes. They seem to plod along slowly and aren't nearly as engaging as the recent ones with the ninth, tenth and eleventh doctors. But it has been interesting to see how each of the doctors differed over the incarnations and the years.

There are many other things I could be doing, but for now this is the most enjoyable.

and this is the card that Sandra sent - my first subway map card! 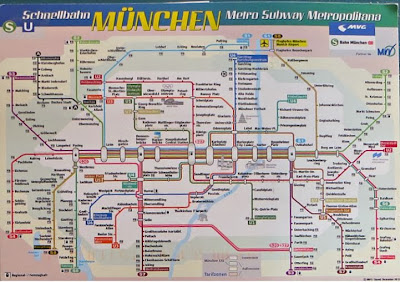