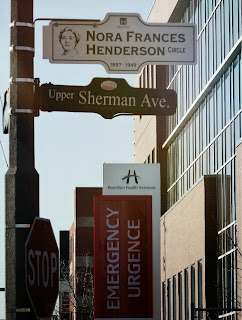 In 1954, a 322-bed hospital on Concession Street on Hamilton Mountain was named after Nora Henderson. But more recently the name was changed, amid considerable controversy, to the Juravinski Hospital and Cancer Centre in recognition of major donations by Charles and Margaret Juravinski.


It was a bitter battle between the city and the Hamilton Mountain Heritage Society as can be seen in this report:


What was fought so hard for by one little woman on city council was wiped away with the flick of a pen by bureaucrats that grovelled at the feet of the well-heeled to secure funds needed to expand the aging facility.


The Hamilton Health Sciences board of directors relieved the Nora Frances Henderson Hospital of its name, enticed by the allure of gambling money flaunted by a wealthy donor.
After the HHS board refused to reconsider the matter, the heritage group asked the city to install commemorative street signs around the hospital in recognition of the first women elected to Hamilton City Council. Council thought it was "the least they could do". No one from the HHS attended the unveiling of the new street signs.

A strong supporter of health care and the rights of women and children, Nora Frances Henderson served 16 consecutive terms as an alderman and controller. She died in 1949, five years before the Henderson Hospital was built.

You can read more about this feisty woman here                  Eighth in a series on street signs for signs,signs
Posted by VioletSky