Although the sign says 'Jamesville', I have never heard anyone call it that. It is always just James Street North.  It could be just me, of course.  There are several business that use it in their name. According to the Hamilton Public Library website "The Jamesville Neighbourhood is like an umbrella that covers the Central and North End Neighbourhoods, two neighbourhoods that have had a long history of working together." 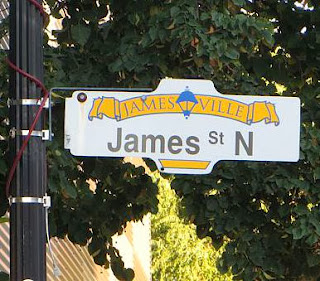 James St used to be called Lake Rd because it was the road that lead north to Lake Ontario. It is now divided into north and south at King Street (hwy 8) and has been named for the son of one of the founding fathers of Hamilton. The street had been in a decline for many years but is enjoying a resurgence and rejuvenation lately. It is not really a gentrification, though there is a fear that may soon happen. It is here that every second Friday night of the month  you can experience the James North Art Crawl where galleries and studios are open late and buskers and musicians and crafters are out on the street. Even the Cathedral is open for the public to visit and partake of complimentary refreshments.
I love areas that are in transition. The old roots of the Portuguese and Italian neighbourhood is still in evidence with the bars and small stores, but mixed in is now a new arts district. Running for about eight blocks between Wilson to Murray are many artisan, retro, recycle, and upcycle shops. There are coffee shops and restaurants - old and new - for all tastes. Independent artists studios, galleries, as well as small museums, the new CBC Hamilton studios and the tourism office have all opened up recently. At the far southern end is the Jackson Square mall that many blame for the decline of the downtown core. It is only in this mall that you will find any chain stores.

tenth in a series on street signs for signs, signs
Posted by VioletSky