and then it is all over

Had a shortish sleep before heading back to work, but now, with another holiday weekend upon us, can rest up until Tuesday.

The malevolent gods tried one last time, sending enough thunder and lightning and rain on Kennedy to cause a 5 hour - yes, FIVE HOURS - delay on my 7 1/2 hour flight. Three and a half of which was spent on the plane. The crew knew we must be starving, so eventually brought out the meals, but with a plea from the pilot (as it was against all regulations) that if we got the call to move forward we had to put our tables in the upright position in the seatback ahead and hold our trays in our laps!! (Un)fortunately, we were done eating (we were that hungry!) before we finally took off. But really, it only gave me one more good story to dine on for the entire two weeks. Every time I was entreated upon to tell it again for the next visitor, I got a lot of "oh dear, how awful" followed closely by a desire to give me a drink "after such an ordeal", even if it was days after the fact and I had totally gotten over the tiredness of the long wait. With each retelling, I was richly rewarded.

Last night, I opened up the computer to masses of emails. 199 to be exact. Deleted about 170 of them but of the rest which were not spam, I read all the lovely messages from you all.

I know, you just want the pictures now, don't you?

More will follow, but for now I need more sleep. And to vacuum the cat hair off of everywhere - I missed the darling, but oh how nice it was to be free of the hair! 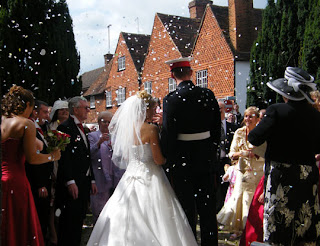 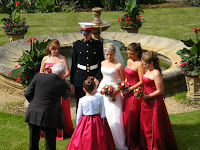 and here we have the view of the reception hotel at Tylney Hall where the family (20 of us) stayed overnight with great pleasure! 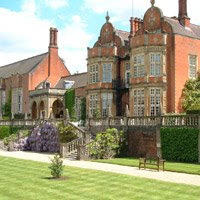 the next morning, my cousin R and I.