The nearest Apple Store to me is about a half hours drive to Mississauga, which is two cities over. Mississauga is a sprawling community immediately west of Toronto created by an unpopular amalgamation of several small towns and villages in 1968. Interestingly, the two holdout villages, which were later annexed in 1974, are the only really 'quaint' areas. There is not much that is old in Mississauga, except for the mayor. (Really, she has been in office as mayor since 1978 after being the mayor of one of the former villages. She is a feisty 91 years old!!)
After getting my SD card back, I popped it back into my camera and left Square One (one of the largest malls in Canada and you know how I love, er hate, malls) to go for a walk outside. I didn't really expect it to be a nice walk, this not being one of the 'quaint' areas. The area is full of tall buildings and not much streetscape. But apart from the lack of charm, and the busy 8 lane roads, it turned out to be pleasantly walkable, if you lived there. In fact, I looked it up on the walkability scale and it scored a walker's paradise (90/100) whereas where I live only scored a very walkable (I think it was the lack of a good grocery store that pulled the marks down to 87/100) 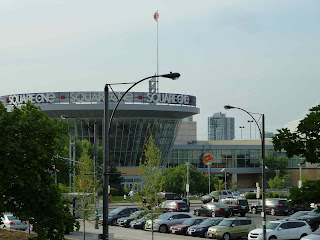 There is no traditional downtown here, but they are working at creating a 'vibrant' city centre which includes this shopping mall, a civic centre and city hall, a new public square, library, theatres, a new college campus, police station, many businesses, a Y, a Playdium ... and new homes. Lots and lots of new homes. Condos.

Including this, the Pièce de résistance. The ultimate landmark.
The Marilyn Monroe....
Officially known as Absolute Towers you can click on the link to read more about them or check out this site to see more photos 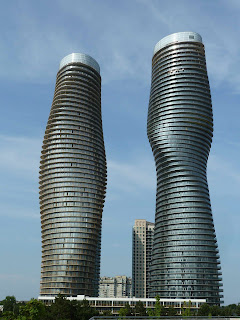 I LOVE these buildings. And this is the best place for them to be built. You can see it from one of the major highways. It is in the city centre with other tall buildings around, but is not completely surrounded by any of them. What would be the point of building something so unabashedly sexy and gorgeous if it would end up being squashed by other less glamorous towers. 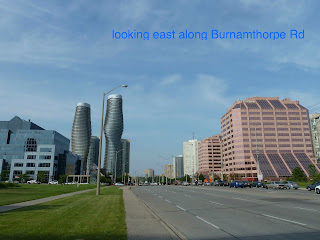 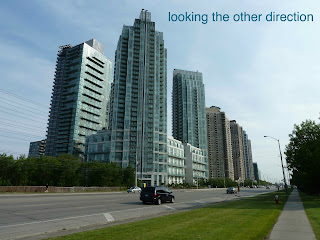 There is a lot of construction going on, and there was a red light when I took these pictures,
so the traffic flow is a bit deceiving.
But the streetscape is a bit... barren, soulless. Not a patio restaurant in sight.
No storefronts with interesting windows
(they are all in the mall which is on the other side of the street from these photos) 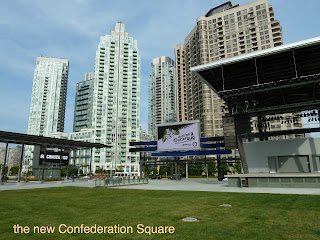 the new Confederation Square was still under construction last week, but looks very promising (it was officially opened yesterday) 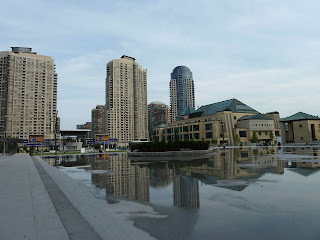 the building on the far right is the library


the fountain is being used as a splash pool at the moment but will be used as a skating rink in the winter. I particularly like the little island in the middle.


This square will be used for concerts, (there is also a small amphitheatre) festivities (like the International Indian Film Awards going on now), markets, and even, for the first time in history, an outdoor council meeting in celebration of its opening. 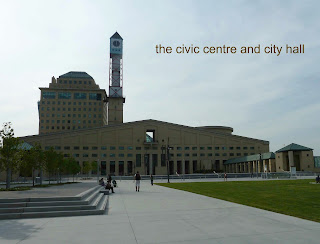 Where I live looks nothing like this, though there are some at city hall who would like to pander to the developers to make it so.

click on any photo to embiggen
Posted by VioletSky

Labels: a lovely day to be outside, architectural delights, neighbourhood walks, walking made easy