Going out for coffee can turn into quite an adventure. Two weekends ago there was that traffic snarl when the skyway bridge was closed (which turned out to have a tragic story of a woman killed when she jumped out of a moving car). 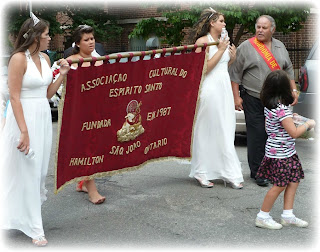 Last weekend it was a parade along the streets in front of the cafe. After navigating the police car blocked off streets by the cafe, I parked and followed it for a bit, trying to guess what it was in aid of. It looked like some kind of saints parade that ended at the St Mary's Catholic Church. 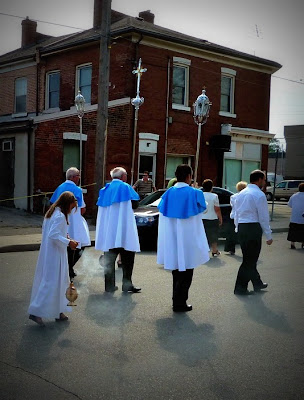 The incense was a bit overpowering.

It may have been the heat, or the heavy clothes the participants were wearing, but none of them looked particularly happy to be walking. At one point I saw a queen flanked by two princesses (couldn't quite read the rest of the banner), the queen was too busy texting to wave to the bystanders. 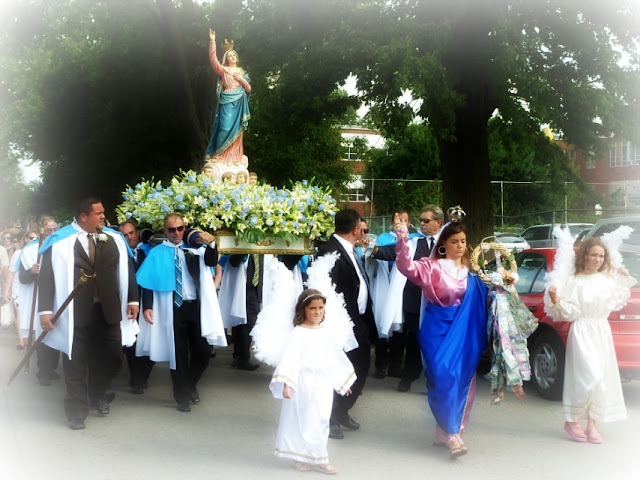 The church was nicely decorated with strings of lights and I meant to go back to get better shots of it when the parade ended and I had finished my coffee, but I forgot. 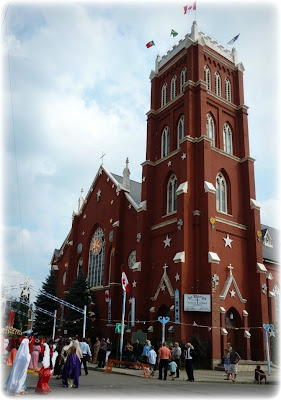 There was a lot of finery and each group of women had on the same outfits (I guess the men did, too, but it was harder to differentiate) but the shiny, bright evening wear belied a certain insouciance. Maybe it was the heat. Maybe they had been marching for hours already and were just tired. But I found my initial excitement at seeing the little girls wearing garlands and angels wings, and the priests dressed in their robes with mitres and the marching band just vanished into a bit of ennui. (I suppose some Portuguese might have been more appropriate than French, but I don't know any.)

I can't wait to see what diversion this weekend will provide.
Posted by VioletSky