Today is the day The Ex opens. The Canadian National Exhibition. A Toronto tradition since 1879. I haven't been going that long, but people around here seem to have long, fond memories of The Ex of old.  There have been many changes and evolutions at this venerable old fairground. The Ex itself is a little underwhelming and I am not a midway fan, but the one unifying memory seems to be the food. Specifically, The Food Building.  The Food Building was the place to go to get all those free samples. Back in the day, the stalls used to be geared towards manufacturers who would provide freebies or cheap samples of their new wares (some of them even cooked!) to entice you to later buy their product at your local supermarket. We would leave there a lot less hungry and arms laden with bags and bags of food and coupons and recipes. The last time I was there it had evolved into a glorified food court of fast food chains, many of which could be found at any mall. Where's the excitement in that?

Of course there is also the carnival food that is new and, erm, exciting. Though every year it seems to become more and more bizarre. And unhealthy. Truly unhealthy. Last year it was fried butter, this year it is the Krispy Kreme donut cheeseburger, coming in at a whopping 1500 calories. Also on offer are such things as deep fried cola, deep fried mac and cheese, deep fried kool ade, deep fried cheese curds, deep fried pop tarts. Noticing a trend here?

And to think I thought Tiny Tom Donuts were a wonderful novelty. And candy floss. All could only be gotten only at The Ex. 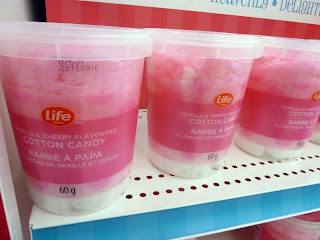 Then, today, in Shoppers Drug Mart I found this

Is nothing sacred anymore?

Where's the excitement in that?
Posted by VioletSky

Labels: food, recipes I've never used but am sure are excellent