There were still thousands of people standing patiently in a line that wrapped right around City Hall this evening in order to pay their respects to Jack Layton. It was about 2 1/2 hours long. 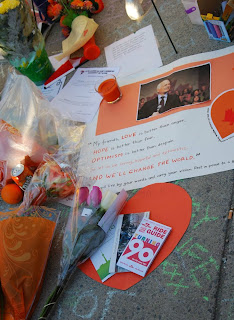 Jack (he was always Jack, not Layton or Mr Layton - nothing so formal) was a city councillor and MP in Toronto who later became the leader of the New Democratic Party and then in last May's election, the leader of the opposition. He was a man of the people and even those people who did not - and perhaps never would - vote for him, have been deeply affected by his death. It was not completely unexpected, but shocking all the same. We all had hope...

I shook his hand once. Many years ago, when I lived almost but not quite in his riding on the Danforth, I was standing in line behind him in a bakery. Some other people came over to talk to him and somehow I was drawn into the conversation. I have no memory of what the talk was, but I do remember his laughter and those eyes that sparkled in their intensity when he looked at you. When he was ready to leave he shook hands with each of us and waved to the others sitting at tables nearby. He was not just going through the motions, he really cared about and knew so many people.

What other politician would spend his last days writing a letter to his fellow citizens [Canadians]?

It is long, so I won't repost it all but here are a few snippets from his letter to Canada dated two days before his death

All my life I have worked to make things better. Hope and optimism have defined my political career, and I continue to be hopeful and optimistic about Canada.
...
To other Canadians who are on journeys to defeat cancer and to live their lives, I say this: please don’t be discouraged that my own journey hasn’t gone as well as I had hoped. You must not lose your own hope.
...
And finally, to all Canadians: Canada is a great country, one of the hopes of the world. We can be a better one – a country of greater equality, justice, and opportunity. We can build a prosperous economy and a society that shares its benefits more fairly. We can look after our seniors. We can offer better futures for our children. We can do our part to save the world’s environment. We can restore our good name in the world. We can do all of these things because we finally have a party system at the national level where there are real choices; where your vote matters; where working for change can actually bring about change.


My friends, love is better than anger. Hope is better than fear. Optimism is better than despair. So let us be loving, hopeful and optimistic. And we’ll change the world.
All my very best,
Jack Layton
Jazz has conveniently posted it in its entirety on her blog which you can read here. 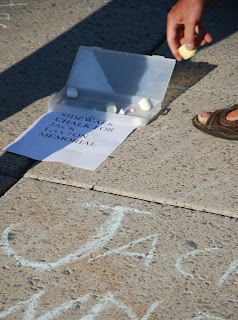 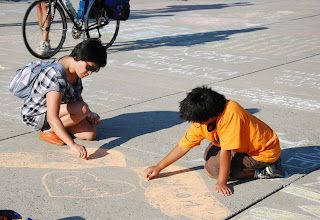 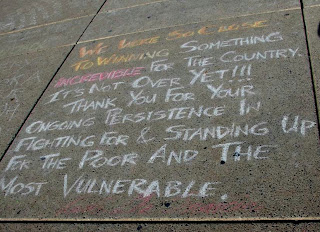 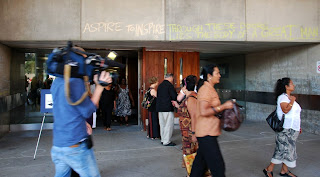 For several days, people have been leaving messages on the cement at City Hall, 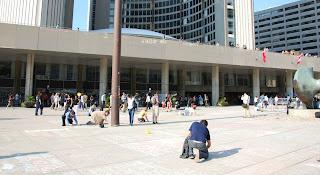 some of it has been washed off with the rain, but more is added... 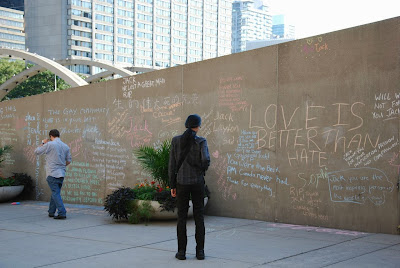 Olivia (his wife) made an appearance 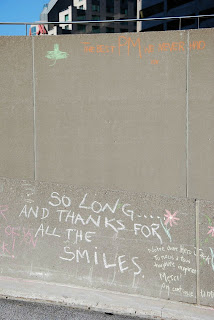 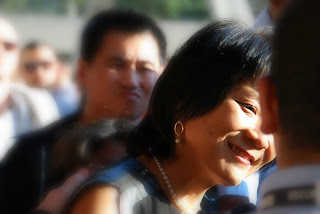 'the best PM we never had' 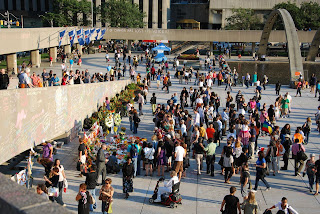 You will be sorely missed, Jack.
Posted by VioletSky