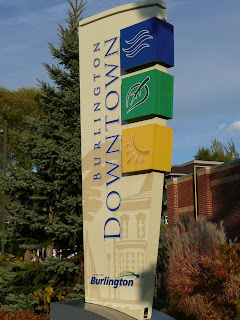 continuing with my series of discovering Burlington through the alphabet, we have signs for DOWNTOWN.  first up, we have this gateway sign on Brant Street letting you know you are now DOWNTOWN. there are two of them that have been around for about three years or so. 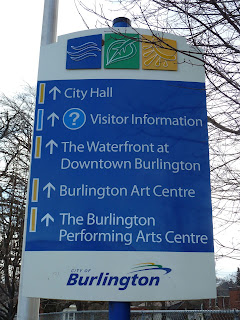 then, just in the past few months, these signs started appearing at various intersections.
to be honest, I am not sure what the blue, green and yellow represent. 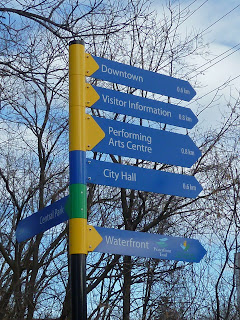 the really astute among you will notice that the Visitor Information is represented by a blue strip on one sign, but a yellow one on the other. City Hall is yellow on one and blue on the other. Central Park is green, so I guess that is meant for parks, except that the Waterfront, which is also a park, is not green

I find them really confusing, especially the one on the right as it seems to direct you in a direction that is not the most direct (especially for a cyclist and these are on the bike path as it crosses side streets) and once you have gone to the end of the street that is in the wrong direction (unless you were driving) there is not another sign that tells you to turn right. at the moment it would be easier to continue across the street and cut through the parking lots to get to the next intersection that will take you right to all the places listed here.
if you were in doubt, you could check the map that is also made available. I do wonder why these were thought necessary. maybe it will be for all the new people who will be moving into the condos being built 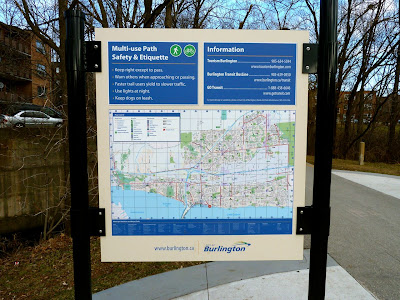