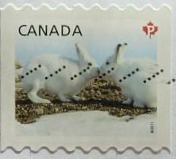 lepus arcticus aka arctic hare or polar rabbit
they look like rabbits but have shorter ears and can stand up taller and are adapted to live in the tundra regions of Greenland and northernmost parts of Canada, like Labrador and Nunavut. this is another in the cute baby animals series Canada is producing

lepus europaeus aka brown hare, eastern jackrabbit
is adapted to the temperate, open country of northern, central and eastern Europe and western Asia, which could be why both Russia and Belarus have honoured him on their stamps.
Since Viridian gave us a choice of anything we wanted, I am dedicating this theme for Maggie May who asked last week "where are the rabbits"?

Labels: because you asked, stamps, stamps&postcards