Emma's at the Estaminet 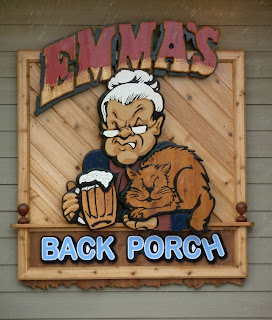 The Estaminet building is the longest running restaurant in Ontario. It first opened in 1910 by Emma Byrens and her husband, George. It has changed hands many times but since 1992 has been known as Emma's Back Porch.

There have been many fights discussions about the street where this restaurant sits, along with about a half dozen other not so historical buildings and developers wishing to tear them all down and build condos. It was a relief when the Estaminet Building was granted heritage status - and soon after, much needed renovations began.

One of the beauties of this location is its proximity to the waterfront with a big patio looking out over the lake. But, it is a sports bar so the inside is what you might expect. And packed with people during sporting events and weekends. The Water Street Cooker located in the upper level is a complete change of pace with an upscale dining experience which I can't afford.

After going to several of the Save Our Waterfront meetings, one thing I learned is that if you pronounce the name wrong - and many people do - some life long Burlington resident will tsk tsk under her breath that it is esta'-min-et not e-sta'-mi-net (fr: e-stä-mē-ˈnā) a French word meaning a small (and sometimes shabby) cafe selling beer, wine as well as coffee and snacks. It may have been the same person, now that I think about it (and it always seemed to be a she), but at every meeting, it happened.


Another experience of Burlington through the alphabet for ABC Wednesday

Labels: architectural delights, where I live