This week I received 2 postcards from Chicago, but unfortunately, neither of them were of the city itself. Disappointing, but then, how were the senders to know that Chicago is in my top three favourite cities of the world I have never actually been to see? The Postcrossers read the clues in my profile and sent along very nice art cards, but I am hoping for some more Chicago Architecture one day. In the meantime, I do have these art colored cards of the one of the largest fountains in the world. Each one shows the fountain from a different angle and all were unsent cards.
All are from the Max Rigot Selling Co. for Postcard Friendship Friday 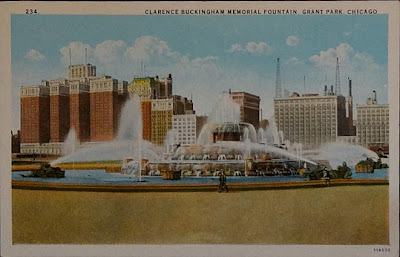 The Buckingham Fountain, designed by noted Chicago architect and city planner, Edward H Bennett, was built in 1927 and stands as the centrepiece of Grant Park. Although modelled after the Latona Fountain at Versailles, it was designed to symbolize Lake Michigan through its impressive water displays 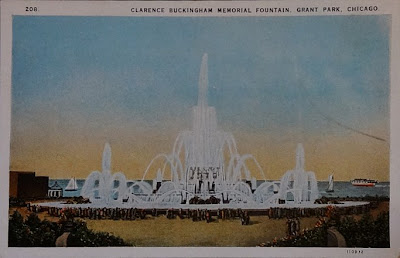 The major display, which uses up to 15,000 gallons of water through 93 spouts, sprays water up 150 feet from the ground and occurs every hour for 20 minutes, from April to October. 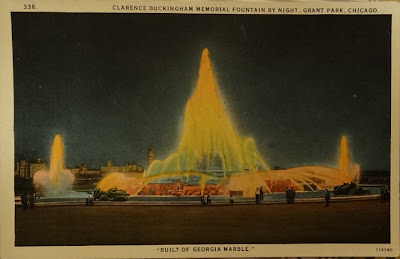 At night, there is a choreographed show with lights and music.

It seems the Buckinghams were a very wealthy family from their financial interests and investments in steel, banking and real estate. And all of them had personal interests and investments in art, which the longest surviving member who became known as "Chicago's Grandest Spinster", donated to the Art Institute upon the deaths, in turn, of her mother, sister and brother. It was for her brother, Clarence, that she donated one million dollars to have this memorial fountain built and maintained. Clarence Buckingham was a trustee and former director of the Art Institute of Chicago as well as an Asian art collector.
Posted by VioletSky