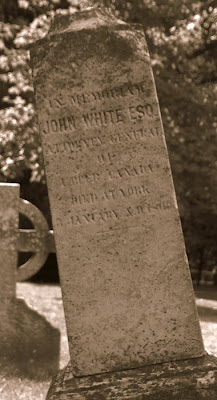 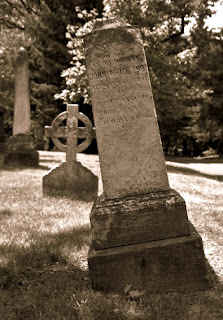 Born in 1761 in Middlesex, England, Mr White was educated at the Inner Temple in London. After being called to the bar in 1785, he had an unsuccessful law practice in Jamaica before returning to England. Still unsuccessful, he was contemplating a new career as a clergyman when a friend from law school recommended his appointment as attorney general in Upper Canada. In 1792 he was in Kingston for a short time until the government moved to Niagara-on-the-Lake (then known as Newark) then on to York (Toronto) in 1797 when the government again changed locations. By then his wife, Marianne, had joined him with their three children, but it was not a successful reunion and she returned to England with their daughter in 1799. But not before getting into a catfight with a certain Mrs Small.

Mrs Small did not think much of the 'notoriously quarrelsome' Mrs White and snubbed her at an assembly. Mrs White apparently did not think much of Mrs Small's virtue and said as much to a Mr Smith. Perhaps she did not like that Mrs Small's virtue did not stop her from having a fling with Mr White. She already did not think much of Mr White himself, as they had been estranged for several years before she met up with him in York. The scandalous remarks got out into society, as these things do in a small provincial town. Mr Small now did not think much of Mr White who could not control his wife's words (or apparently his own wife's virtue) and challenged him to a duel. Mr Small was charged with murder after Mr White succumbed to his wounds 36 hours after being shot, but was acquitted.
In the end, Mr White would be remembered more for his death than his career, which included the formation of the Law Society of Upper Canada, and Mr Small's reputation would be ruined and his career overshadowed by the duel.