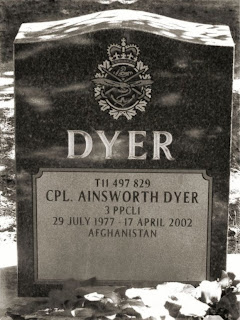 Corporal Dyer was taking part in a night training mission in Afghanistan on April 17, 2002 when his position was bombed by an American warplane in a friendly fire incident at Tarnak Farms. Sadly, he and three other Canadian soldiers were killed and eight more were injured.

Their deaths were the first of Canada's war in Afghanistan.

Dyer was just 24 years old. He was born in Montreal and grew up in Toronto. He enlisted in the Canadian Forces in 1996 and would go on to become a member of the Princess Patricia’s Canadian Light Infantry. Cpl Dyer had aspirations of gaining an engineering degree upon completion of his service in the Canadian Forces.

A plaque bearing the names of Sgt. Marc Léger, Cpl. Ainsworth Dyer, Pte. Richard Green and Pte Nathan Smith lies on a floodlit memorial beside the Canadian headquarters at Kandahar Airfield, Afghanistan. Corporal Dyer was commemorated in February, 2003 on the Rakkasan Memorial Wall at Fort Campbell, Kentucky. He is buried in the Necropolis in Toronto.