and the squiggles are....

Maps and I go well together. I always have a map of any new city I'm visiting.
These particular maps from yesterday fascinate me.

For the way they take something that is so familiar and mess with your brain by leaving out certain details.

Yet, manage to make it more accurate.
A legendless map.
I grew up in Toronto, always seeing the city as lying on a straight east-west axis with Yonge St running straight due north. Just as the map indicated.
It is not. We are on an angle.
Subway (Metro) maps are notorious for their distortion. 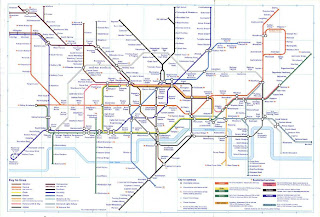 The iconic London Tube map was designed for simplicity, not geographical accuracy. Note how the Beck map (designed in 1933) has lines that are only vertical, horizontal and at 45 degree angles. It is also not to scale. 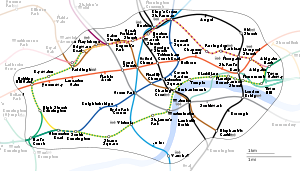 This is a more geographically accurate depiction.
Not nearly so pretty, is it?
That Beck design has been copied and used throughout the world, though.
New York's subway system presents a unique challenge in part due to the size of the land in Manhattan and the number of lines running though it. I could go on, as it has a fascinating history but, I won't. Don't want to bore you. And it is again a beautiful sunshiny day (ironic as I am writing about undergound rail transport that rarely allows the light of day in....) and I need to finish this and get myself outside. 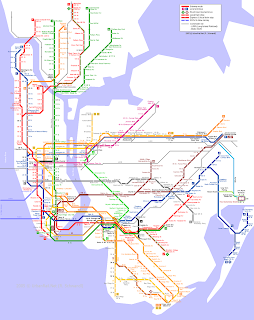 Again, one could be forgiven for getting a little confused as to which direction one was actually travelling. And, this doesn't give an accurate description of how many rail lines are involved on several levels with each colour coded line.

I am not as familiar with Montreal's system, Maybe Jazz can expand on it's deficiencies.

I am also not familiar with Chicago's system, but to me this looks pretty darn close. I included this one as I thought it might be recognizable by a couple of you (as it was!)

I included Moscow's map, just because I like it and I have always wanted to see their Metro Stations 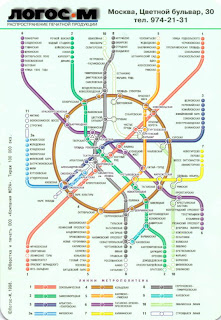 So thanks for playing and for your guesses!
Posted by VioletSky