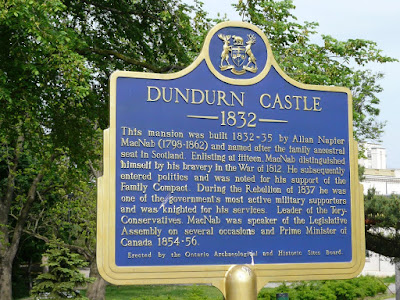 There is great excitement in the local media.
For the Prince of Wales and Duchess of Cornwall are coming to visit tomorrow.
They will plant a tree at Dundurn Castle.
Just as Grandpa George did when he was here in '36. 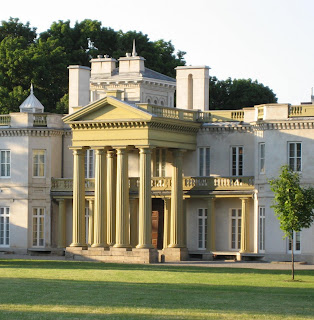 This will be very exciting for Camilla. It is her first visit to her 'ancestral home' in our great land.
You see, it is well known that Dundurn Castle was built by native born Sir Allan MacNab, but some sleuthing and it turns out he was Camilla's great-great-great grandpapa.
You can read the flattering bits about him on the plaque above.
Really, it looks more like a very big house than a castle and indeed it was, at the time it was built, the largest private home in Upper Canada [Ontario]. It also had the honour of having one of the first flush toilets in the Empire. The castle is open to the public, though I have only ever walked the grounds. It is usually elaborately decked out for Christmas, so maybe then I'll take myself inside for a photoblog post.

In the meantime, I did find this old postcard in my stash of old postcards. My father was from Hamilton and I remembered that there were several he had kept from before the war and which I now have. I found one just like it on a website of vintage postcards of Hamilton and think it was probably taken around 1934-35. 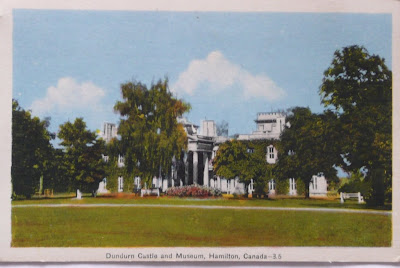 So King George's tree isn't shown.
As an added bonus, I was reminded by Jo about Alice Keppel, which I neglected to mention. We need a bit of salaciousness, no?
Alice was Camilla's great grandmother, who was married to Sir Allan MacNab's daughter Sophia's son George. Following? Well, while Alice was married to Mr Keppel she was having a little bit on the side with .... The Prince of Wales, Edward VII.
He was the last Prince of Wales to visit Dundurn long before he met Alice, who was living in England.
Posted by VioletSky