When I drove from Ottawa into Hull, one of the first things that stood out for me, was that the traffic lights were different. Not only were they on a long straight arm over the intersection, they were ... horizontal.

That is just so wrong. Well, not wrong really, but so different than what my brain tells me to expect. It was startling.

Traffic lights should be on a pole at the edge of the sidewalk, or on a meridian.
Or on a short curved arm extending over one lane.
And most importantly, vertical.
And yellow.

But on a wire extending from one side of the road to the other with the signals twisting in the wind. Now that is wrong and deserves serious re-designing. 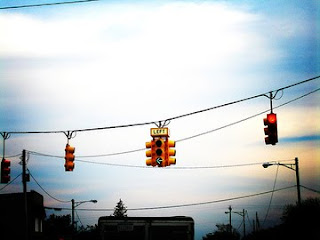 Now, I spend a long time (sometimes hours, even) on some of my blog posts. Especially the ones with photos. The photos have to be the correct size and positioned just so. And the accompanying text has to be specifically aligned. This can cause great consternation with the click and drag option. But I am particular about how I want everything to look.
The other day (week, actually, since this has been sitting in my 'drafts for oh, awhile...) I succumbed to one of the many pop-up invitations to try out Google Chrome. I had been with several friends and the conversation somehow turned to the glorification of the 'chrome'. It was so loved by at least two of my friends that I decided to give it a go. It was purported to load faster and I thought that in itself would be a wonderful thing.
It took a little getting used to finding where everything was. The font was a little different. I liked the instant spell check - though I had to constantly 'Canadianize' it by adding any 'our' word to the dictionary. The tabs were now on the top, instead of the bottom of the screen. And instead of eventually clumping together in a hidden vertical sequence when it got to be too many open tabs (I am easily distracted) they just kept being added in a long horizontal sequence. It wasn't what my brain told me to expect.
Neither was my finished post exactly as expected when I switched from IE to Chrome. All that careful layout was slightly off.
I once commented to another blogger who had posted a photo of her computer screen on one of her posts that I had no idea there was actually another column far off to the right hand side. In fact, I couldn't even see all of her photo without having to scroll down because it was too large to fit on my 17" screen. It wasn't until then that I realized there was also a scroll bar on the bottom. What she was obviously seeing on her screen was not what I was seeing on mine.
Which makes me wonder, is the image of our posts different if you are using a Mac vs a PC? Since Internet Explorer shows differently that Google Chrome, how many other variants are there?
...and why won't Blogger let me embiggen some of my photos??
Posted by VioletSky

Labels: blogs, having a bad day, I need to embrace technology, photography