Spring seems a long time coming.
Last year, at this time, spring had been here for weeks,
though it is hard to accept that that was EARLY. An anomaly.
And it is Tulip Festival time in Ottawa.  I went to see it last year and there were fears that the tulips would be over before the festival began.  The ones we saw were a little spent and blown out, or battered by the rain.  This year, a very different story.  There are fears that there won't be any tulips blooming in time for the festival (which begins on Friday).  Before leaving Ottawa on Monday, I noticed workers were setting up tents and pavilions and getting things ready.  But any tulips we saw were barely out of the ground.
And as, usual, it rained while I was there.  For the third year in a row.  We did have two warm, sunny, clear days, but it was on Monday with the incessant, pelting rain that I chose to visit the Parliament Buildings with the misty view from the Peace Tower. 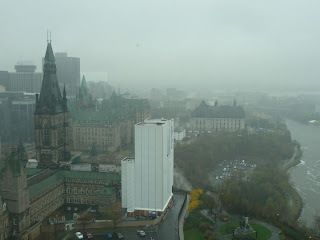 (a view of the west block which is still undergoing extensive restoration work.)
It was raining so heavily and I was so soaked that even though the Parliament Hill area seemed deadly quiet and therefore pleasant for walking, I thought I'd head home early and stop off at any town where it wasn't raining to walk around. 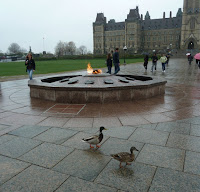 Even the ducks came out of the river to paddle around the Eternal Flame (they had jumped out by the time I reached them, but were circling around, ready for the next plunge).


I decided to have dinner in Kingston, a city I'd stopped at very briefly on my last trip to Ottawa and wanted to see more of at a time of day when places were open. This was the first capital of the Province of Canada (in 1841) so they have a nice historic downtown, right on the lake and I remembered that their City Hall was rather magnificent looking and my previous pictures weren't all that great so I wanted to get better ones. 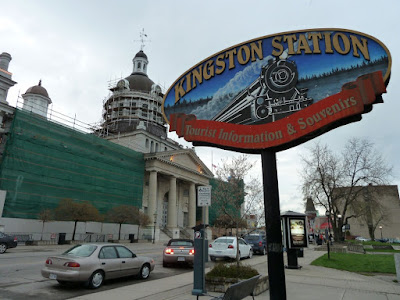 yeah, the cute tourist information place inside the old train station was also completely covered in scaffolding and green netting while it gets a new roof. 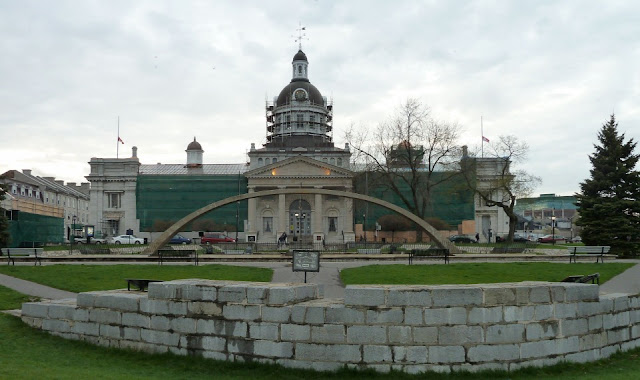 Then it started to rain again.
Posted by VioletSky