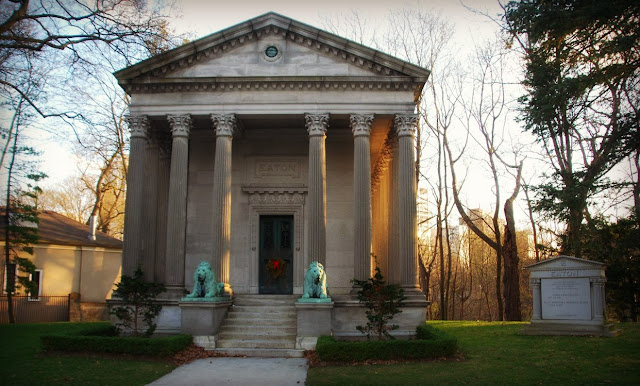 The Eaton Family Mausoleum, Mount Pleasant Cemetery
A well known name to all Canadians as the family behind the Eaton's department store
(sadly now gone under due to not quite keeping up with the new generation and era of 21st century).
Patriarch Timothy Eaton came from Ballymena, Ireland and started his new life in Canada in the 1860's moving to several locations and trying his hand at different businesses before buying property at the corner of Queen and Yonge Sts in Toronto and opening his namesake store. By 1907, the year of his death from pneumonia, Eaton's had become the most influential and important department store in the country. Apart from the retail empire, there is also the Timothy Eaton Memorial Church built from donated funds of son Sir John Craig Eaton.
Interred inside the family mausoleum along with Timothy and his wife Margaret are three of their infant children who died at 10 months, 11 months and 22 months as well as three older children including Sir John Craig Eaton who became company president after his father's death until his own in 1922. 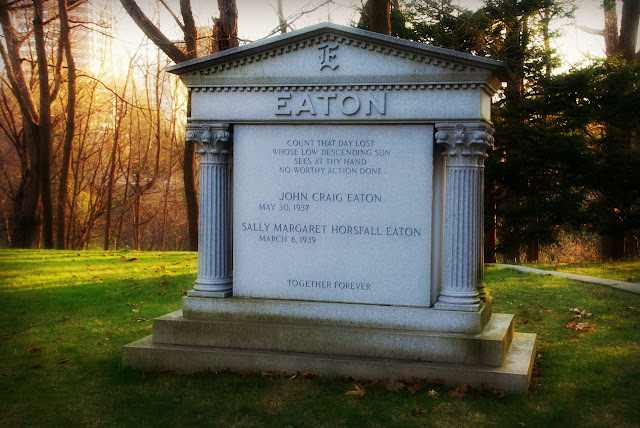 There are several more family members inside the mausoleum
with John Craig Eaton (4th generation) and his wife Sally not quite ready for their place of eternal rest
and a few more in a nearby plot. 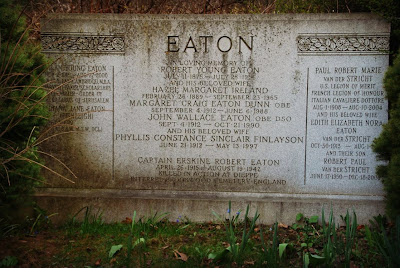 For years, the Santa Claus Parade in Toronto was sponsored by Eaton's with Santa ending his trip through the streets at the Eaton store on Queen Street. A bronze statue of Timothy Eaton sitting in a chair was commissioned to commemorate the store's 50th anniversary in 1919 as a thank you to the family for their support and generosity to employees during the war and now sits in the Royal Ontario Museum. It soon became a tradition to rub Timothy's toe as you passed him through the entrance and this tradition still stands at the museum (the only thing in the ROM that is encouraged to be touched!)

There is so much to be said about this family, but I will encourage you to read this excellent article if you are interested.