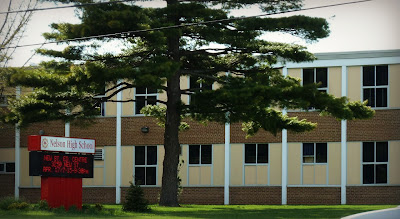 Nelson High School may not be the most photogenic looking building but it begins with an N for our ABC Wednesday tour of Burlington....
Located on New Street,
it was built in 1957 and named after Horatio Nelson - he who defeated Napoleon's Navy in 1805. According to an internet article, the school celebrated the 200th anniversary of that victory "with colourful events and staff dressed as characters from the day". it is nice to see that the namesake of the building is recognized and celebrated.

I didn't go inside, but there is a mural of the HMS Victory painted by former teacher Robert Bateman (who is a naturalist more known for his wildlife paintings). 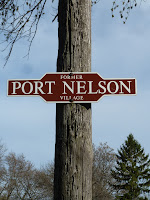 The school is also located in the former village of Port Nelson which was incorporated into the City of Burlington in 1874.


Among the other places named Nelson, there is a Port Nelson United Church, which I include here because they are celebrating their 60th anniversary this year with a special service on May 6th. A nurturing, inclusive community church it was also one of the founders of the local Habitat for Humanity.

another note of trivia, one of the members of the band Walk off the Earth (with a new video!) which was featured here was a student at Nelson
Posted by VioletSky