If you are expecting a concise precis and opinion piece about the Presidential Debate, I should let you know that you will not find it here. You'll need to look elsewhere. 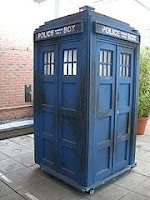 While many of your were sat on your sofas watching the debate last night, I was not. You see, I had a date with The Doctor. Who? Yes, he is back. After months of waiting, months and months (this season started in APRIL in the UK, for crissakes!) HE has returned.

Am I alone in this? Any other David Tennant fans?* Dr Who allegiances? Do you need an explanation? What is Dr Who?

Here is a brief (very) synopsis: 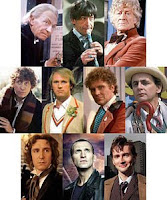 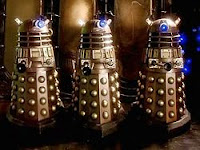 Last week introduced Catherine Tate as Donna (actually introduced in the Christmas special in the UK, which CBC has not deemed important enough to show here. Damn them. Who makes these decisions?) I wasn't sure about this comedienne as a companion, but by now I realize I love Donna. She is a refreshing break from the giddy, awestruck Rose and the mediocre Martha. Donna stands up to the Doctor and there's less adoring glances and more sass. There is more hilarity this time around and the chemistry between The Doctor and Donna should prove to be an intriguing season.
Okay, I'll stop. For now. You can read about The Doctor here and the episodes here. And watch online here. The official website is here.
*I know Crystal Jigsaw and Sagittarian are with me. Check out More Canterbury Tales for her post on David Tennant.
Posted by VioletSky