mix and match and moving

My tidying up went rather well yesterday. I'm now ready for autumn. Bring it on! My duvet has been aired and is on the bed. The flannel sheets are on the top of the linen pile. The cushion covers have been changed from bright to moody. The fall wreath is on the door - the one with yellow and reddish brown berries. And the closet has been reorganized so I can neatly stash stuff in it. It is no longer a space of a confused multitude of things. And I found out that the bottom drawer of the sideboard was ... almost empty. How that happened, I do not know. But there was a humidifier and a file box in front of the drawer... Yes, I am that lazy. I hadn't bothered to move them out of the way for a long time.

I actually have a lot of storage space where I am living. A double closet in both the bedroom and the living room, plus a coat closet and a linen cupboard. And 15 kitchen cupboards. It is also the newest built place I've lived in, having been built around 1964. I think this is an important point. Robin had asked how it was possible for an apartment to not have closets. I started to think, maybe I had misremembered. Is it possible? None at all? But no, it was true. I spent the rest of the night at work thinking about all the places I have lived.

I grew up in a 1950 era bungalow and have since lived in high-rises, low-rises, attics and basements. I've lived in one room in a house with another family, boarded and shared kitchens and bathrooms and even stayed in an intentional community. I lived in a dorm for 6 months in Holland and out of suitcase for 6 months in Australia and NZ.

In some of these, it didn't matter about the storage as I was young and didn't have much stuff. But, it does boggle the mind to look at older homes and their layout. The tiny bedroom closets. Some have no hall closet at all. So if you are living in a main floor flat of a house, chances are there may not be any closet built in. My favourite flat was in a walkup of an Edwardian building (1912). It had the smallest kitchen (you could turn on the tap, stir a pot on the stove and open the fridge door by simply turning around). It had only enough counter space for a small drying rack. The table in the corner was used for prep and eating. And holding the toaster and coffee maker with an extension cord to the only outlet in the dining room on the other side of the wall. The two bedrooms had only corner closets! Where did people put their winter coats, never mind their other clothes? I put up hooks. Another flat I lived in was the main floor of a small semi-detached 1930's house. The washroom was in the unfinished basement, which served as the only closet. That kitchen was huge (I had a rocking chair in it, plus a table that sat 6) but it had only 2 kitchen cupboards over the sink. The strangest flat I had was a room with a toilet and sink. The shared kitchen was in the hall and there was a full bathroom (also shared) on a landing to another flat. But, it was in an architecturally arresting 18thC five-story walkup in Amsterdam.

When I was growing up in the 60's I remember the excitement of the new gadgets that entered our house, most of them requiring electricity. By then, the war was long past and people were able to buy more new and 'useful' things. A lot of it was kitchen aids for the housewife to enjoy her work. This is where the new need for extra storage became a necessity. The need for more electrical outlets was also a necessity but mostly, I think that meant having one in every room. Storage containers (Tupperware, anyone?) became ubiquitous. Electric appliances proliferated (can openers, knives, frying pans, waffle irons, Osterizers, kettles) and all were much larger than their previous manual cousins. The bane of my kitchen is the crockpot. I love it, but it does take up so much space. Now there is the microwave, which requires it's own set of cookware. 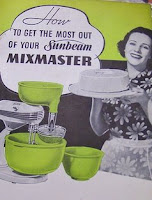 Luckily, I don't bake so I don't have one of those nifty retro mixers - I would love to have one as an accent for the look alone if they weren't so expensive and useless to me.
But I'd probably have to move to find room for it.
And I've done enough of that.


How about you? What kinds of accommodation have you found yourself living in? What quirky features have you learned to live with?