At least when Otis sheds, I don't get turtle hairs all over my clothes.
But, we do have to deal with this: HE IS STILL GROWING.
Turtles shed their shells during growth spurts. In anticipation of a lazy hibernation, his body will be busy getting even bigger. Great. He should really be living within his means and that means is a 36x17x15 aquarium.

See that darker square in the centre of his back?
That is where one of these came off.

Something's gotta give, they are like fingernails and very thin and almost transparent. Tortoiseshell ornaments will also peel if they get too dry. But we don't have any of those, do we?!
In other news, it is now official that Lonesome George will have no progeny this time around as all the eggs have been verified as infertile. But, he has to deal with this: another turtle (tortoise, actually) that is 176 years old. Apparently Jonathan posed for a picture with some Boer War soldiers and he has been outed as the oldest of his particular species. Not sure how he was recognized - Boer War? So George could have many more years of interference in his social life.
Every time I hear of aged turtles, I give an inward sigh ... how long will Otis decide to keep growing?
~~~~~~~~~~~~~~~~~~~~
I don't have a Christmas Tree, but I do have some twigs I decorate. And I have a plant stand I use for poinsettias and storing small gifts on so that as I buy them, I can easily remember what I have bought (yes, I have been known to forget. sad, isn't it?). 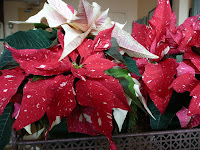 And this year, I was given an early present of TWO Amaryllis. Now their growth spurts and the way they shoot up with such magnificent majestic blooms are a joy to watch. 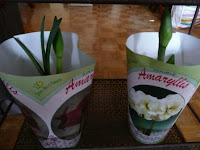 I need to find a good spot for a photo shoot to chart their progress.
I also need to pick up some stuff left lying on the floor and get my laundry bag downstairs to the laundry room.
Posted by VioletSky