I was looking for a funny vintage Christmas card for my Monday post ... and became sidetracked. Mostly, I got sidetracked by Santa. And Father Christmas. And St Nicholas. There are so many variations and permutations of this soul over the centuries. His image has changed greatly, from his outfits to his weight, even his attitude. The one constant seems to be his flowing white beard. It all started with my wondering about his coats of many colours - blue, purple, green, brown, red. What a fashion statement he was! 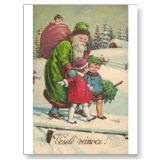 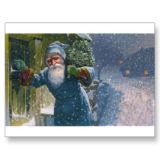 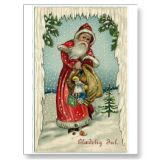 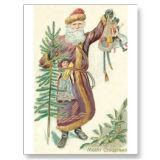 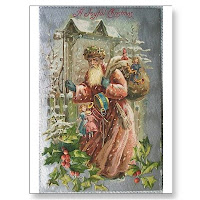 In reality they are not one and the same person.

He has been around a very long time. He wasn't called Father Christmas then, of course, because he originated as a pagan figure. Don't we get all our best religious festivities from the pagans? He represented the coming of spring and appeared mid-winter wearing a long, hooded green cloak, and a wreath of holly, ivy, or mistletoe.

When the Saxons invaded, they added their own solstice tradition of Father Time (or Old Winter or King Winter as he was also known) and an old guy would be seen representing him by dressing up in a long, hooded fur cloak and wandering from house to house to be welcomed with food and drink. It was thought that if you were kind to Father Time you would get something good in return (a mild winter, perhaps? or an early spring?).

Then came along the Vikings who, with their God Odin, celebrated their own mid-winter as Jultid by dressing up as one of Odin's 12 characters Jul. Odin was a little heftier than Father Time and eventually the once svelte Father Christmas becomes bigger. He changes into a blue cloak and gets to ride a horse and was claimed to have magical powers to know whether people had been bad or good, dispensing gifts to the good and punishment to the bad.

Finally, the Normans came along and brought the story of a 3rd century bishop with them. St Nick came all the way from Turkey and was especially kind to the poor and to children. 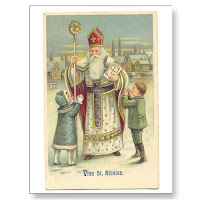 ...the story of St Nicholas and Santa Claus continues.
Posted by VioletSky