As you enter Mount Pleasant Cemetery from the west side of Mt Pleasant Rd you cannot miss it. 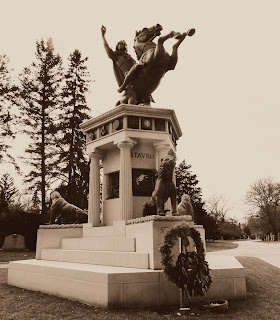 This monument sits on its own island. It is a complete overindulgence of ego. As far removed in designe from the mausoleum of the Eaton family shown last week as you are ever likely to get.

Steve Stavro was born in Macedonia and now lies under statue of Alexander The Great riding a rearing Bucephalus. 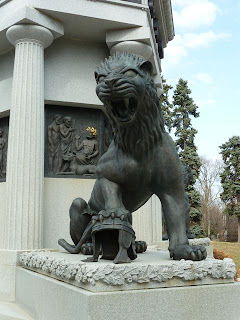 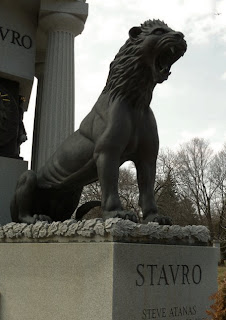 
it is worth noting that each of these lions, and the horse, has all of its boy bits.


there are bas reliefs of ancient Hellenic scenes surrounding the pedestal 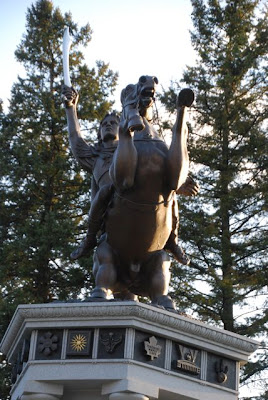 and symbols and logos of his various interests in business, sports and community and the honours he has received. These include The Toronto Maple Leafs hockey team (former owner after some intricate dealings as the executor of the previous owner, Harold Ballard's will), Maple Leaf Sports and Entertainment, through which he owned The Raptors basketball team (which interestingly was once owned by his cousin, a rival), soccer, a race horse, the Thoroughbred Owners and Breeders Association, Maple Leafs Gardens, Knob Hill Farms (his grocery store which was the original big box store), The Royal Winter Fair, the Masons, the Knights of Malta and the Order of Canada 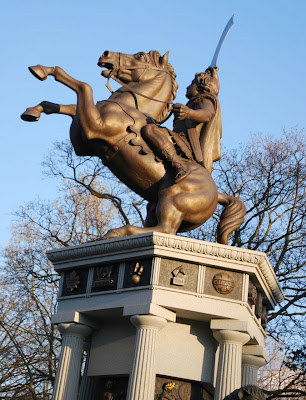 Steve Stavro was born Manoli Atanas Stavroff in Macedonia and emigrated to Canada at age seven where he was given the anglo name Steve by a teacher (as was common in those days). He became a famous and infamous person not only for his business dealings and his ownership of the losingest hockey team Toronto Maple Leafs. His first business after leaving school in grade 10 was following his father in grocery and he soon opened up the first of his 'food terminals', Knob Hill Farms in 1963. These were closed by 2000, but he was not short of investments or interests. His most passionate interests were the Leafs and his racehorses, but he was also a lifetime director of The Royal Agricultural Winter Fair, honorary director of the Ontario Jockey Club, a founding sponsor of the Hockey Hall of Fame, a director of The Liquor Control Board of Ontario and a campaign chairman of the Emergency Critical Care Fund of the Toronto East General Hospital.
He died on April 23rd, 2006 (though many media sources state April 24th) of a heart attack in his home that overlooked the 18th hole of the Rosedale Golf and Country Club. His monument to himself was completed less than a year previously. He was married to Sally and had four daughters and nine grandchildren and two great-grandchildren when he died.