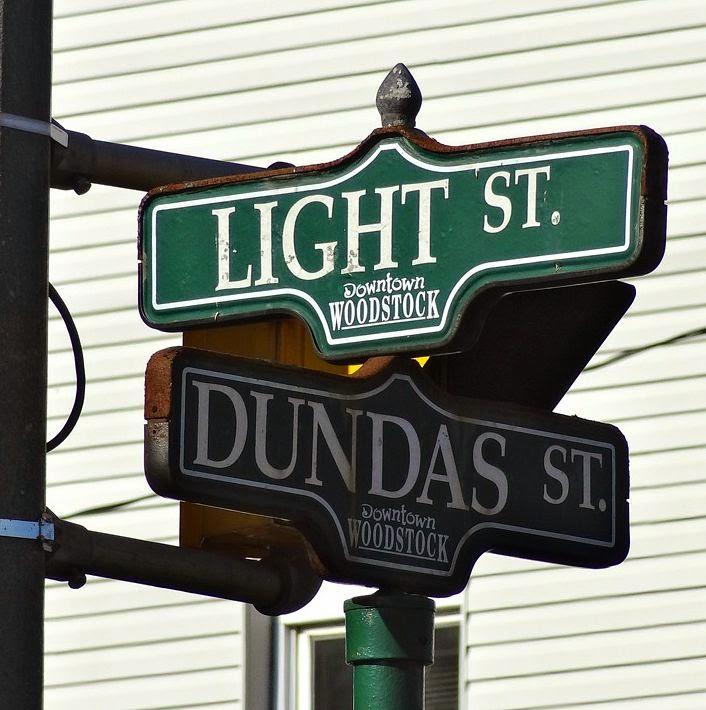 I have no idea where Light St in Woodstock got it's name. It just made me smile to see that that sign was in the sunlight, while the Dundas St sign was in shadow.

twelfth in the resurrected series on street signs

EDIT: thanks to Andy and his sleuthing, we now know that Light St was named for Alexander Whalley Light. By the 1830's retired British military men were encouraged to move to the colonies to help settle the land and ensure loyalty in the community to the Crown. Colonel Light was the first of these new British immigrants to arrive in Oxford County.

below is an excerpt from a diary entry in 1833 by Cpt Phillip Graham
Monday, 21st. A fine day. Went to visit Colonel Light’s new building on his land adjoining mine. This building is of brick — a good large house 42 feet by 28 but when the wings are added the front will be 84 feet facing to the south in a fine elevated situation about the River Thames which is there rather narrow. The country here is well cleared and finely undulated with high hills. Walked to the Village of Beachville about 1 1/2 miles from Light’s. Here are grist mills and saw mills and two whiskey distillers — with a small Tavern and good stores. The road from the bridge at Cedar Creek runs principally along and near the South Bank of the Thames and is one of the best roads I have seen in the Province — along which an English carriage may be driven with safety. The country all the way from Hamilton to this part abounds with apples and all kinds of vegetables of the first quality — also abundance of cherries.
--- sadly, there is not now the same abundance of all kinds of all kinds of vegetables or fruits.

in 1849 he also wrote a book called 'A plan for the systematic colonization of Canada' and all other British colonies which you can read here.  Interesting to read what others think of your pioneer country.
signs, signs
Posted by VioletSky