and then it snowed

Of course, it wasn't Ottawa's fault that the temperature plummeted from 27C (80F) to 4C (39F) overnight and just in time for the world renowned Tulip Festival. Or that the driest winter and spring we've ever had suddenly decided to turn wet and windy and miserable. Or that I came prepared for the weather people to be wrong about the cold. My sandals were ditched and I was awfully pleased with my gifted scarf from Paris and I knew that if I dug around in the trunk of my car I'd find a pair of dollar store one size fits all gloves.
Because by Sunday, the rain turned to snow.

The earlier warm weather of March and April brought out many of the blooms two weeks earlier than anticipated. 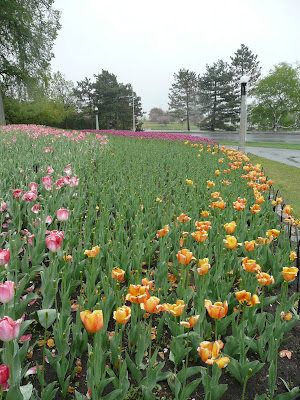 Then again, tulips only bloom for about a week to ten days, so there's always different varieties of early and late bloomers planted to keep the gardens full.
The raindrops made for nice photos (if you could keep the horizontal rain off the camera lens). 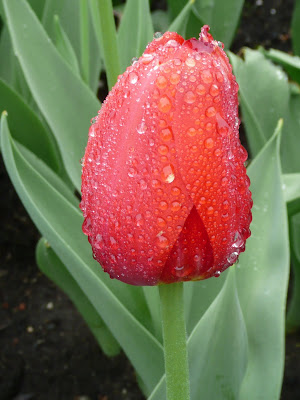 Too bad about the wind and rain that battered a few of the blooms ... and the spectators. 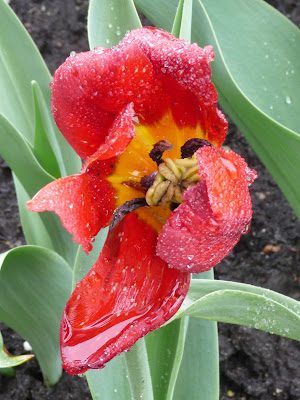 I have wanted to go to the Tulip Festival in Ottawa for several years and I thought, with this year marking the 65th anniversary of the Liberation of Holland, that this should be the year to visit. The tulips were a gift from Princess Juliana of The Netherlands for helping out her family by giving them refuge in Canada during the occupation and then liberating her country. Over 120,000 bulbs were given the first year after 1945 and they have been continuing to arrive every year since. Now there are about 3 million of them decorating the city. I didn't count them all, but that seems to be the accepted number, although maybe only 1 to 2 million were blooming at one time.

So XUP and Jazz and I ventured out into the rain and dodged the many, many tourists taking pictures of themselves tiptoeing through the tulips. 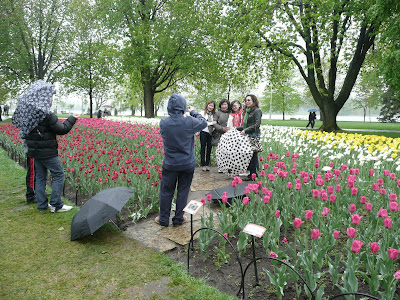 A few umbrellas got in the way of the photos. 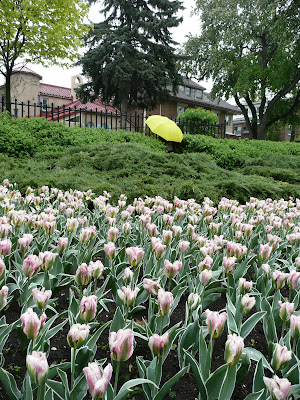 I'm not exactly sure what I expected the tulip festival to be like. Maybe a little more festival-ish.
Though, to be fair, we missed the street party on Friday where Ottawa planned to hold its 'first-ever liberation street party ... to recreate the spontaneous party that broke out when the news of the end of World War II first hit the streets on May 7, 1945'. And there was a parade of 'vintage jeeps and vehicles and costumes' and a fly past of WWII aircraft which we didn't quite manage to see. As I recall, we were eating during those events. And we missed the vintage wine auction to be held next weekend. We didn't find the beer tent with the special brew created just for this anniversary. Considering the festival runs from May 7th to May 24, a surprising amount of preparations were still to be done. 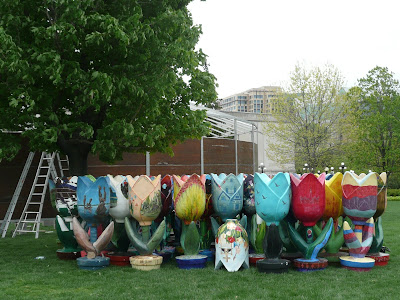 Displays and tents were still to be put up for events held only later in the week. (why not when the festival opened?) The lacklustre food tents and crafts tent just left us wanting for a warm, dry marketplace. And with so much construction, it was difficult to get near the war memorial and the display of archival photos about the history of the tulips and Ottawa.
After a while of wandering in the cold after Jazz went home and XUP was being feted by XUP Jr for Mother's Day, I sought refuge in the National Art Gallery just in time for a Bach Choir to perform in the Rideau Chapel (click on link to see pictures the restored and reconstructed chapel, because I followed the rules and did not take any illegal photographs).

But the weekend wasn't only about tulips.

Jazz and I had the opportunity to break bread with some of the many bloggers in Ottawa. There are an awful lot of people in Ottawa who just can't keep their thoughts to themselves and they are an organized, fun bunch who get together every couple of months for breakfast and even for an annual Blog Out Loud. 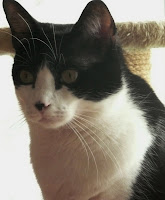 And XUP puts on a great wine and cheese spread.

And that Bazel cat is most entertaining.