For three days last week they came.
Dozens of them. At least 50-60

It was cold and windy and I was inside reading when, out of the corner of my eye, I saw the birds flying. I realized I had actually seen them for awhile (maybe an hour?) before it really registered that something was odd. My first thought was that a storm was brewing.

But they were so quiet. Eerily silent.
They swooped and soared. Taking up the whole sky in their acrobatic dance.
Swallows.

Not the synchronized swarming they are known to do. This was the individual dance portion of their program. The whole back lot was their arena. For about 2 hours they played until, at a predetermined ingrained signal, one by one they silently soared into the sky and were gone.

On the fourth day, I made my tea and settled on the balcony to watch.
They didn't come.

Now, the show outside is all the dancing puff balls.
Some as large a pingpong ball, others barely perceptible, they float in the gentle air like bits of cloud that have broken free.
Hundreds of dozens of them. 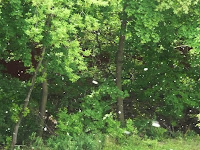 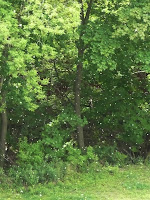 Equally as mesmerizing as the swallows.
Though not nearly as elegant.

Except, it is a mystery to me what tree these came from.
Posted by VioletSky