There was a devastating fire on a cold winter's night in February 1916 in the Centre Block of the Parliament Buildings. 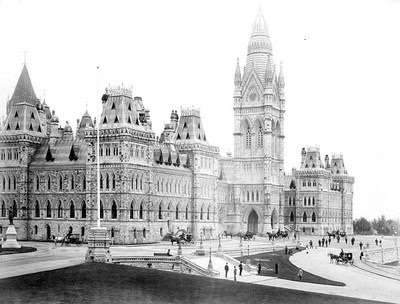 Original Centre Block
Imagine what went through everyones mind, with the young (barely 50 years) country embroiled in the first world war. But it turned out it was not part of anything as sinister as enemy sabotage. It is believed the fire was most likely the cause of careless smoking in the Senate Reading Room. 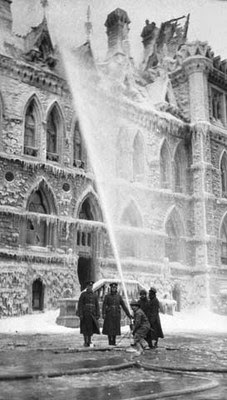 Firemen Spray Water
The only part of the building to survive was the Library of Parliament (designed by Thomas Fuller) at the back of the building due to someone taking the time to close the big iron doors as he was fleeing.
Library After Fire 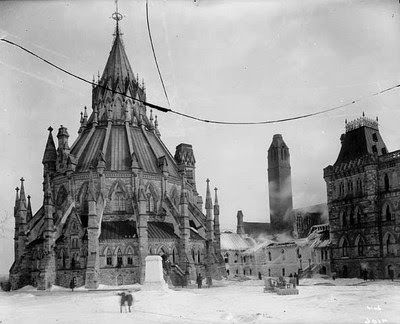 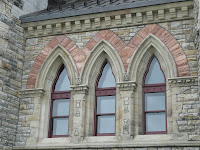 Library Windows after Re-opening 2006
In spite of the war, rebuilding took place almost immediately. As you can see from the top archival photo, the new building was built in a more modern Gothic Revival while the original was a High Victorian Gothic Revival (and as such much more ornate). There are 25 different types of stone and marble used in the construction with much of the exterior done in sandstone from a local quarry.
Parliament Fresh Start 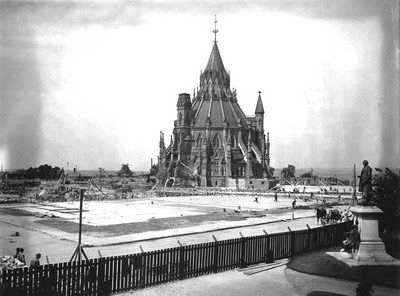 Time and the weather has not been kind and a massive renovation project has been underway since 2002 on all three buildings which is expected to take until 2025. 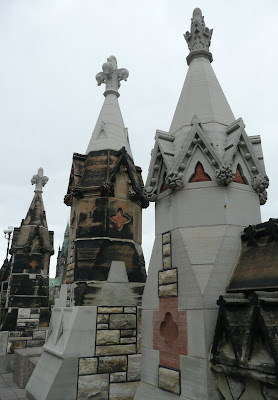 The stone from the gates are slowly being cleaned and restored to their original glory. 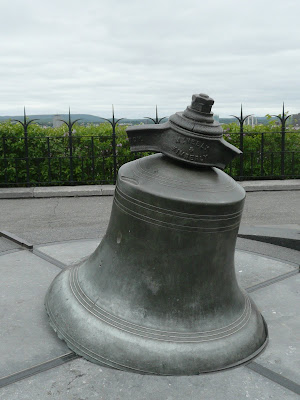 this bell was taken from the ruins
of the clock tower destroyed by fire
February 3, 1916 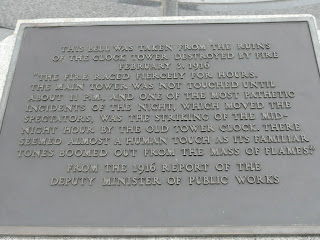 "The fire raced fiercely for hours. the main tower was not touched until about 11pm, and one of the most pathetic incidents of the night, which moved the spectators, was the striking of the midnight hour by the old tower clock. There seemed almost a human touch as its familiar tones boomed out from the mass of flames"
archival photos from CanadaOnline