Colourful stamps were the theme this week. The problem was an overflow of choices..... until I found this lovely set of UK stamps from 1993 commemorating Inland Waterways 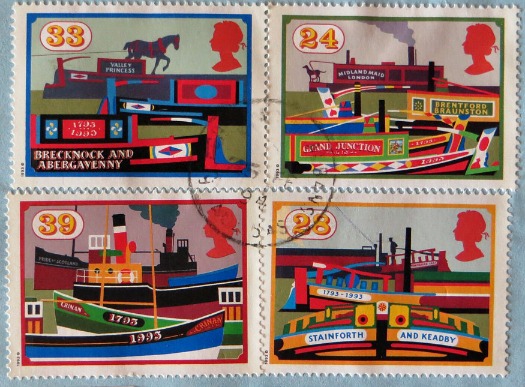 Brecknock and Abergavenny Canal is 33 miles long in the south of Wales. It was abandoned in 1962, but re-opened in 1970.

The Grand Junction Canal was built between 1793 and 1805 to improve the route from the Midlands to London. It's now used mainly for leisure travel and there is lots of information and a cool map on wikipedia


The Stainforth and Keadby Canal is in South Yorkshire and Lincolnshire. Passing through a largely rural area it was a centre for boatbuilding until 1984.

The Crinan Canal was built for commercial sailing between the industrialized area of Glasgow to the West Highlands villages and islands. It has 15 locks and is crossed by seven bridges, six swing bridges and a retractable bridge.
Posted by VioletSky