sometimes, people use street signs for decoration. in this case the owners of this house with a very large garden have a sign from Dundas St in Toronto. what is interesting, is that this is in the town of Dundas, Ontario which is about 50 miles away. 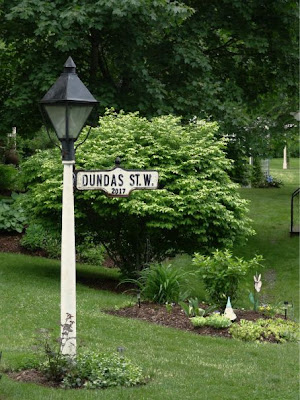 Dundas Street used to go through the town of Dundas, on the Niagara Escarpment, but was redirected  at Waterdown and now goes to Paris. The town was named for Henry Dundas, 1st Viscount Melville, (who never actually visited anywhere in Canada) by John Graves Simcoe, the first Lt Governor of Ontario, who was a friend of his. (many streets were named for friends from back home. made everyone look important, I guess) Dundas the street was named for Dundas the town that was its terminus. (yes, I was confused about this and am so glad to have it sorted. see what blogging can do for your education?!) Dundas Street is an irregular street running somewhat southwest and parallel to Lake Ontario from the Beaches area of Toronto before meandering west, then northwards, then southwest again. It was originally intended as a military route (for the War of 1812) from the capital to the western end of Lake Ontario in the Dundas Valley. And now this (stolen?)* sign graces one of the nicest gardens in the valley.

as an aside,  2017 Dundas St W is the home of Fine and Dandy Window Gallery ("we have no insides so we are always open") which seems appropriate as Dundas the town is well known for its arts and is home to the Dundas Valley School of Art. Dundas the street in Toronto is also home to the Art Gallery of Ontario. but now I'm really meandering (a little like the street).

*Toronto is in the process of redesigning all their street signs and these
old porcelain enamel acorn signs are highly prized items.

this it the fourth in a series of street signs for
signs,signs
Posted by VioletSky