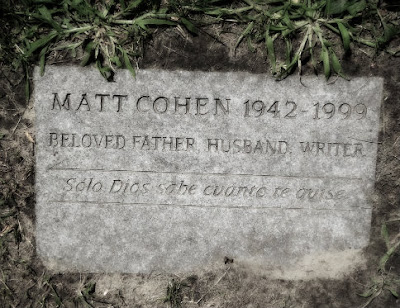 God only knows how much I love you

Two weeks before Matt Cohen died, his last novel (Elizabeth and After) won the Governor General's Award for English language fiction. He had, during 30 years, written over 30 books, including novels, short stories, poetry, and children's books as well as translations of French-Canadian literature.

Mr Cohen was born December 30th 1942 and died December 2nd, 1999. One of his major accomplishments besides being a founding member of the Writers Guild of Canada was, as president, convincing the government to establish the Public Lending Right that ensured writers were paid each time their books were borrowed from a public library. A literary award In Celebration of a Writing Life is presented each year in his name.

I still have one of his short story books, a satirical telling of Sir Galahad's virtuous character. Galahad was the perfect knight. He spent his life in search of the Holy Grail. When he died he found it. It happened at the last possible moment. Just as he was losing consciousness an angel appeared to him and said, Galahad, one more thing.

The angel whipped out a silver necklace and slipped it around Galahad's neck.
There, said the angel, now you have it.