Today is the day the Canadian National Exhibition, or the CNE, or 'the Ex' as it is affectionately called, opens for the 135th year. It runs for 18 days up to and including Labour Day. The next day is the first day of school, so around here 'the Ex' symbolizes the beginning of the end of summer.
For PostcardFriendshipFriday, here are three postcards of the eastern entrance graced by the Princes' Gates.

this first one is a "Canadian Art Deeptone" series 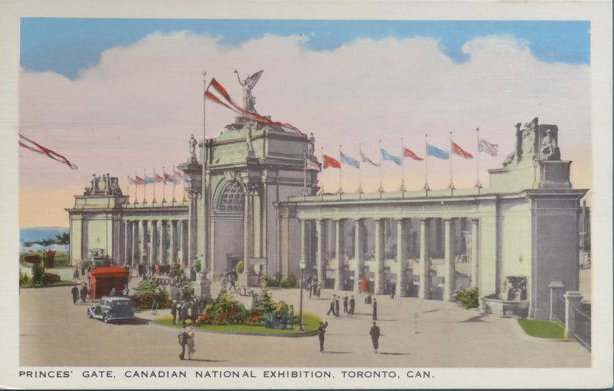 The Canadian National Exhibition has been held annually since 1879 and is the  greatest annual exhibition in the world. It is international in scope. The investment in grounds and buildings is about $20,000,000 with almost 100 permanent buildings covering 350 acres and with a mile and a half  of lake frontage. Annual attendance is over 2,000,000 with annual receipts over a million and a quarter. 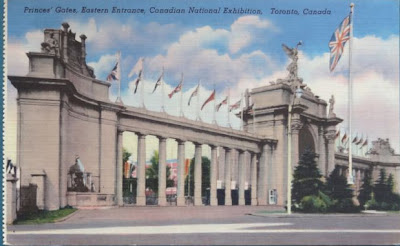 finally, a "Plastichrome" by Colourpicture which is newer and has none of the statistics favoured by the above written on the back. 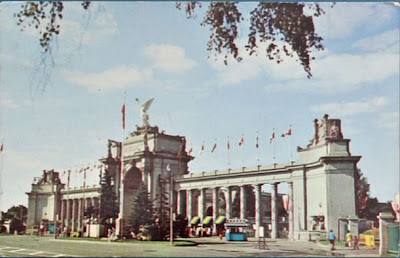 There are nine pillars, representing the nine (at the time) provinces.


Princes’ Gates was opened in 1927 to commemorate the visit of the Prince of Wales, who later became King Edward VIII, and his brother Prince George, the Duke of York, crowned King George VI after his brother’s abdication.

and just to continue with the stats theme..... from the website -
Over the course of its 18 day run, the CNE attracts more than 1.3 million people each year. so, slightly less than during the 1940s(?) when these first 2 postcards were produced.