crowds at the Ex

One reason I don't particularly want to go to the Ex is the crowds of people there. Though, really, the crowds are not nearly as massive as they used to be back before there was competition from so many other festivals and another (all summer long) amusement park. There was a time, when if you wanted to see the newest and most innovative products of the year, this was the place to see them. 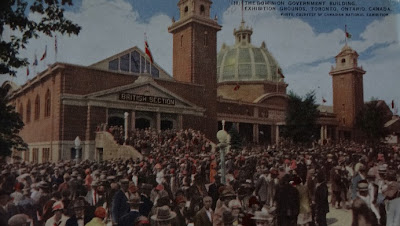 The Government Building would later be named the Arts and Crafts and Hobbies Building (that's how I remember it) and now is called The Medieval Times Building. It is one of several throughout the grounds designed by George Gouinlock, "built in 1912 to showcase the exhibits of local and foreign governments". 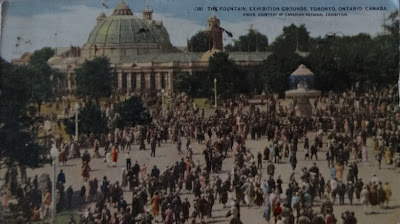 the fountain was a popular spot for meeting up with your friends. it was named for George H Gooderham who was president of the CNE Assoc when it was built in 1911.
(it's now been replaced by a more modern fountain. not sure why) the card above was sent Aug 29, 1951,
while the other card showing the fountain was sent Sep 4, 1937 (though I suspect the postcard is much older)